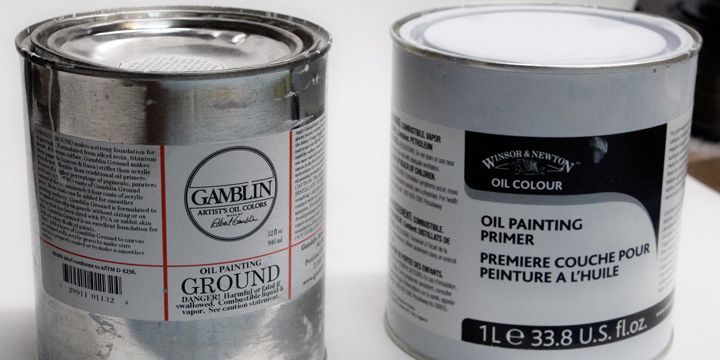 I took about a year to compare two major brands of oil painting primer.  Find out which oil ground I now like the best.

Making a Difference in Your Oil Painting

Before I painted on an oil-based ground I used to work, like most artists, on a painting surface prepared with gesso. I would occasionally use ready-made canvases and panels pre-primed with gesso or I would more often stretch and prime my own canvases. Either way, I always painted on top of a gessoed surface. Modern day gesso is typically liquid acrylic paint with ground up chalk added. It’s basically a really dry, absorbent titanium white acrylic paint.

Painting on this surface was okay but things always felt better once I had a layer or two of dried paints on the surface. I work in pure oil paints and the super absorbency of the acrylic gesso was always annoying to begin painting on.  In other words, I didn’t like how brushing felt for the first session (painting on gesso), but liked the way brushing felt working on top of previously dried layers of oil paint. After a painting was half finished, I really loved how my paint and brushes glided along the painting’s surface!

At some point I decided to give an oil-based primer a try. It was a pain in the neck to apply the stuff and getting used to the longer drying times and preparation required patience and practice, but once I figured all of that out and learned to live with the excessive preparation I’ve been loving painting on oil grounds. Painting on an oil ground has that “slick” feeling of working on an oil painting that is half complete, only it feels this way right from the start!

Oil Based Primer: A Comparison

Both brands of oil ground provided a bright white ground that was extremely pleasurable to paint on. Each ground created a surface that was much slicker than acrylic-based gesso, but not too slick. I really prefer using these oil-based grounds over acrylic gesso for my serious oil paintings.

The application of each oil ground is where I noticed some small differences between the two major brands. The oil-based ground made by Gamblin seemed to be slightly thicker than the comparable primer made by Winsor & Newton. This was only apparent after preparing dozens of canvases. It was so thick that it was harder to get the paint to lay flat. Gamblin recommends using the ground “as is” out of the can; scraping it on with a squeegee and using a brush dabbed in thinner.  I still found it really difficult to get the ground to lay down flat with no bumps or ridges. On the portrait grade linen I use, once dry there were small bumps and streaking where the ground stayed stubbornly piled up.

I found the Winsor & Newton brand oil ground to be slightly thinner in consistency, although both are incredibly thick and each will prepare many paintings. As a result I was able to achieve a flatter painting surface with Winsor & Newton’s oil based primer.

Another perk of using Winsor & Newton’s oil ground over Gambin’s is the dying time. The Winsor & Newton’s oil ground was always dry after 24 hours, ready to be sanded and another layer added the very next day. Gamblin’s oil primer on the other hand was sometimes wet, or at least tacky the next day. The difference in drying time is somewhat of a deal-breaker for me because it takes a long time to prepare a canvas with oil based primers.  Figure one day for the PVA size, and at least a day for each layer of primer. The longer it takes the primer to dry the longer I have to wait until I begin my painting. I love Gamblin’s painting products but for oil grounds I’m sticking with Winsor & Newton’s Oil Painting Primer.

What type of ground do you paint on top of? Leave a comment below