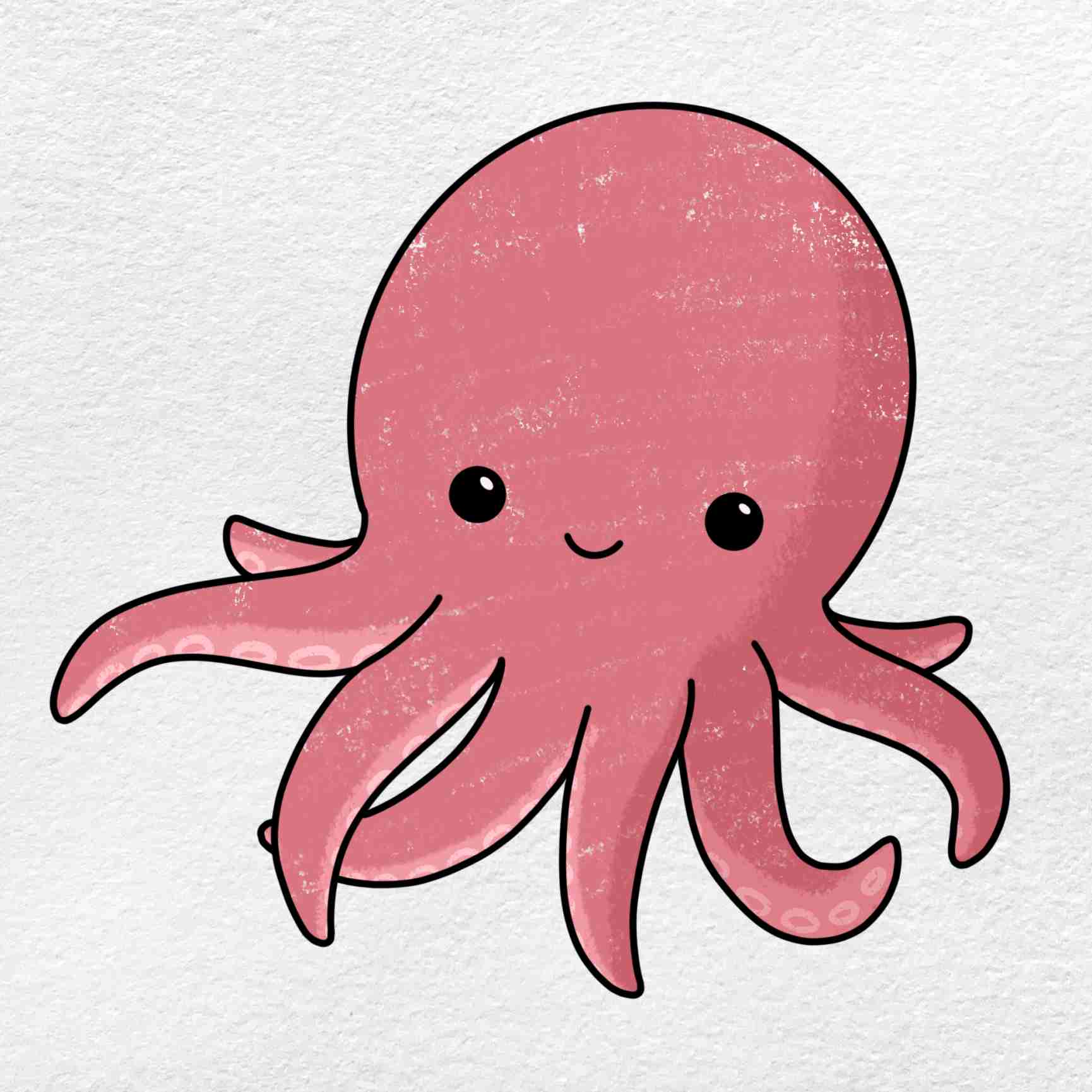 Wish to learn how to make a cute octopus drawing?

Draw along with these basic 6 drawing steps. You’ll learn the basics for drawing a cute octopus.

This lesson only takes about 20 minutes and includes a pdf you can easily print or download. The pdf lesson even contains a “coloring book” page with just the line art. This goes perfectly with crayons. This is useful for very young kids requiring extra guidance and are looking to fill in a cute octopus.

Finally learn to draw marine life by following this tutorial at your own comfortable pace. Embrace your inner artist! 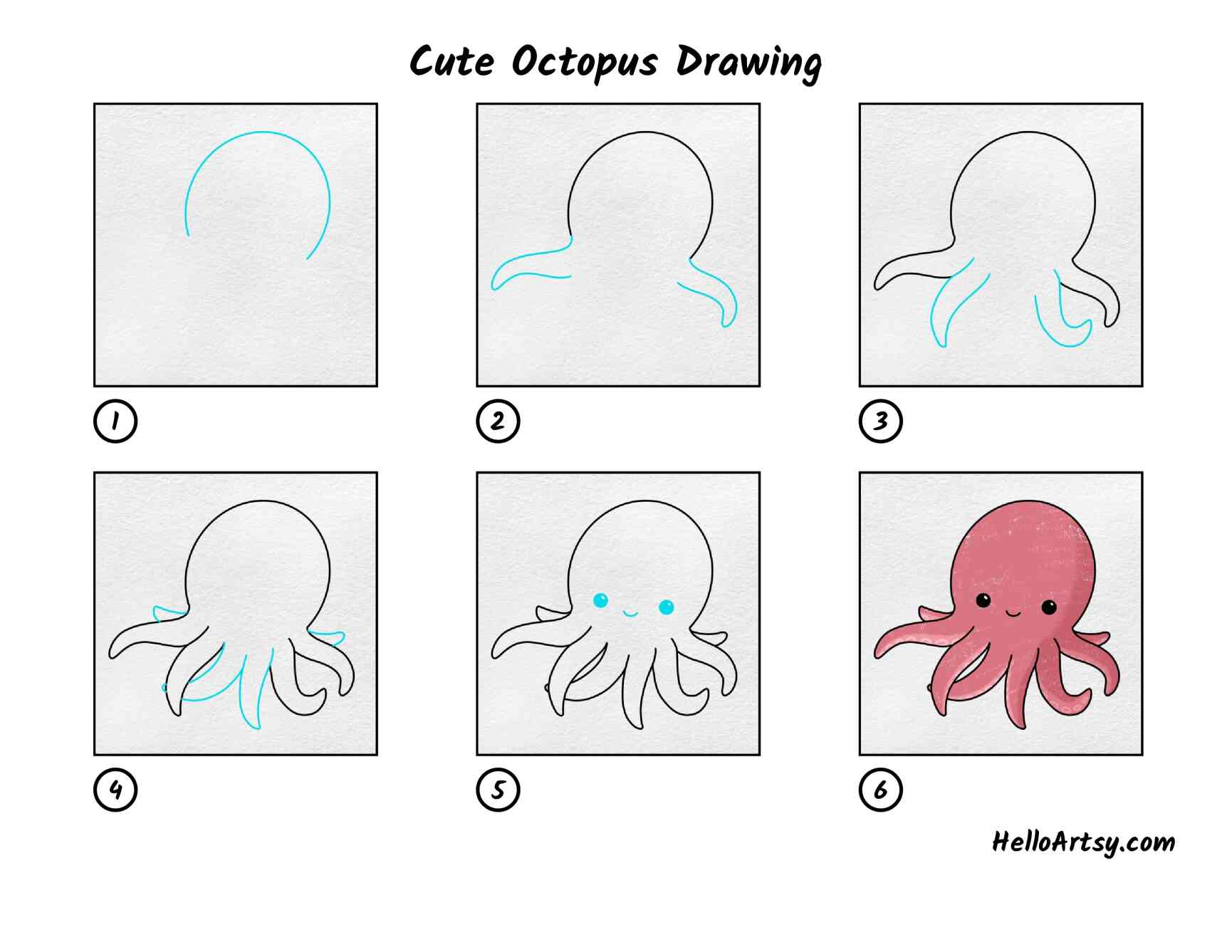 In today’s guided lesson, we will discover how to draw a cute octopus drawing on paper. The shape and proportion of each of the drawn parts will be pointed out in each step of the tutorial. Take notice that the blue outlines are used to indicate the newest elements being drawn in each step.

Click the link below to view or download this drawing lesson. The PDF is a printable drawing lesson for Cute Octopus Drawing. The last page of the downloadable PDF includes a coloring book page with just the outlines and an extension exercise for prompting kids to get creative!

Not Your Typical Sea Creature

Octopuses can now be found all over the world. As a result, their habitats range from rocky or sandy seafloors to life on the ocean floor. They can also be found in North Pacific and Atlantic Oceans

A Mathematician with 8 Arms!

Octopuses are capable of basic counting and addition. They can use this knowledge to break open and eat coconuts that they find on the shore.

The study was conducted by researchers who found that the octopuses remembered how many coconut halves they had seen in a row, even if there were other objects in between them.

This shows that octopuses have a memory for numbers which matches that of other smart creatures like monkeys.

Wow, these findings are really amazing! It’s been traditionally thought that octopuses only had a sophisticated sense of their surroundings and primitive cognitive skills, but now we find out they can think in abstract ways as well.

Octopuses are the only species of animal that have three hearts, blue blood, and brain cells in their limbs. They also create ink to camouflage themselves from predators.

The ink sac is a gland near the octopus’ mouth that can be used to produce a dark-colored liquid designed to make the octopus blend into their surroundings.

This spineless cephalopod comes in a variety of colors and sizes. A unique thing they all have in common is that they possess 8 limbs. The octopus can be found across the world’s oceans at different depths and at different temperatures.

These animals are predatory and take a liking to crustaceans like shrimp and crabs. Their diets differ depending on their size. Babies mainly feed on plankton while fully grown and larger species of octopi will feed on fish, squid, and sharks

All species of octopus except those that live in deeper depths produce ink. They secrete this fluid from ink sacs located in their gills. When an octopus is in danger they will use this ink to escape from predators.

The Blue-Ringed Octopus is one of the most dangerous animals on the planet. Despite its small stature, this octopus packs a punch! The venom from one bite from this animal is potent enough to be fatal to 26 humans.

Of all the animals on the planet, the Flapjack Octopus is certainly among the cutest. This small, umbrella-like octopus is named due to the fact that it can flatten itself like a flapjack! This octopus is also one of the few species in their family that do not produce the ink necessary to escape predators. Checkout this cool video showing a cute flapjack octopus swimming!

This deep sea monster is the largest of the octopuses! The Giant Pacific Octopus is known to grow to about 29.5 feet, from one tip of its tentacle to the other and weigh an average of 20 kilograms.

Why Octopi are so Special!

Octopuses have the unique ability to regrow lost appendages! Once an octopus loses or gravely damages an arm, it will start growing a new one right away.

For them to survive the deep depths of the ocean, octopus’ blood developed to a copper base instead of iron. In turn, the color of their blood also changed to blue. The copper based blood is more efficient in transporting oxygen around the body, even at lower temperatures.