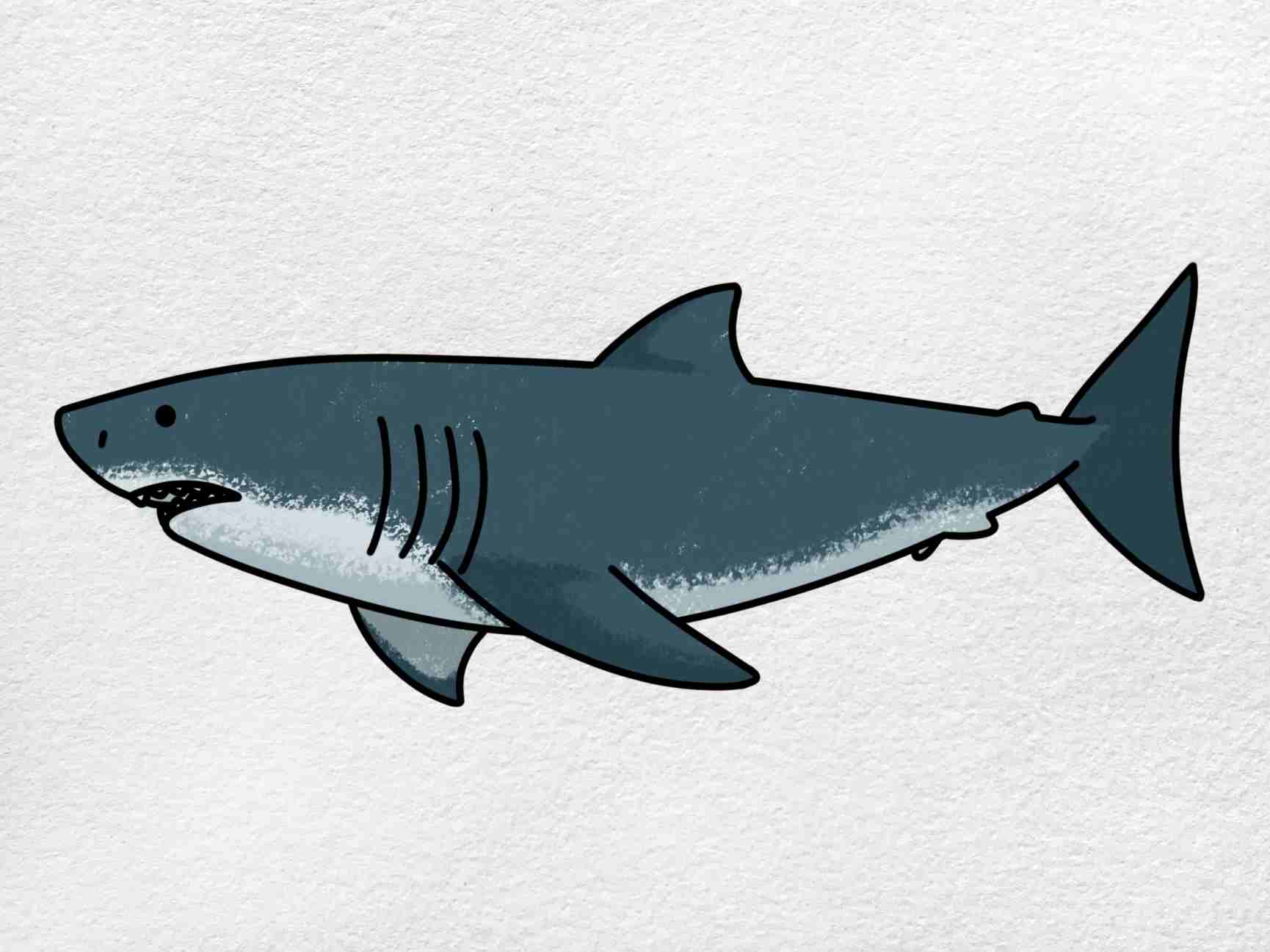 Need to instruct a child how to draw an easy shark drawing?

Enjoy this simple step by step lesson for learning how to draw a shark. This easy shark instruction guide is perfect for fairly young kids looking to learn how to draw.

All drawing steps are included here which make it fun and easy to follow! Expect this drawing to require about 20 minutes, but the art-making process may actually take longer if a background is included in addition to the subject matter.

Finally learn to draw your very own marine life by following this lesson at your own pace. …and now for the easy shark drawing lesson… 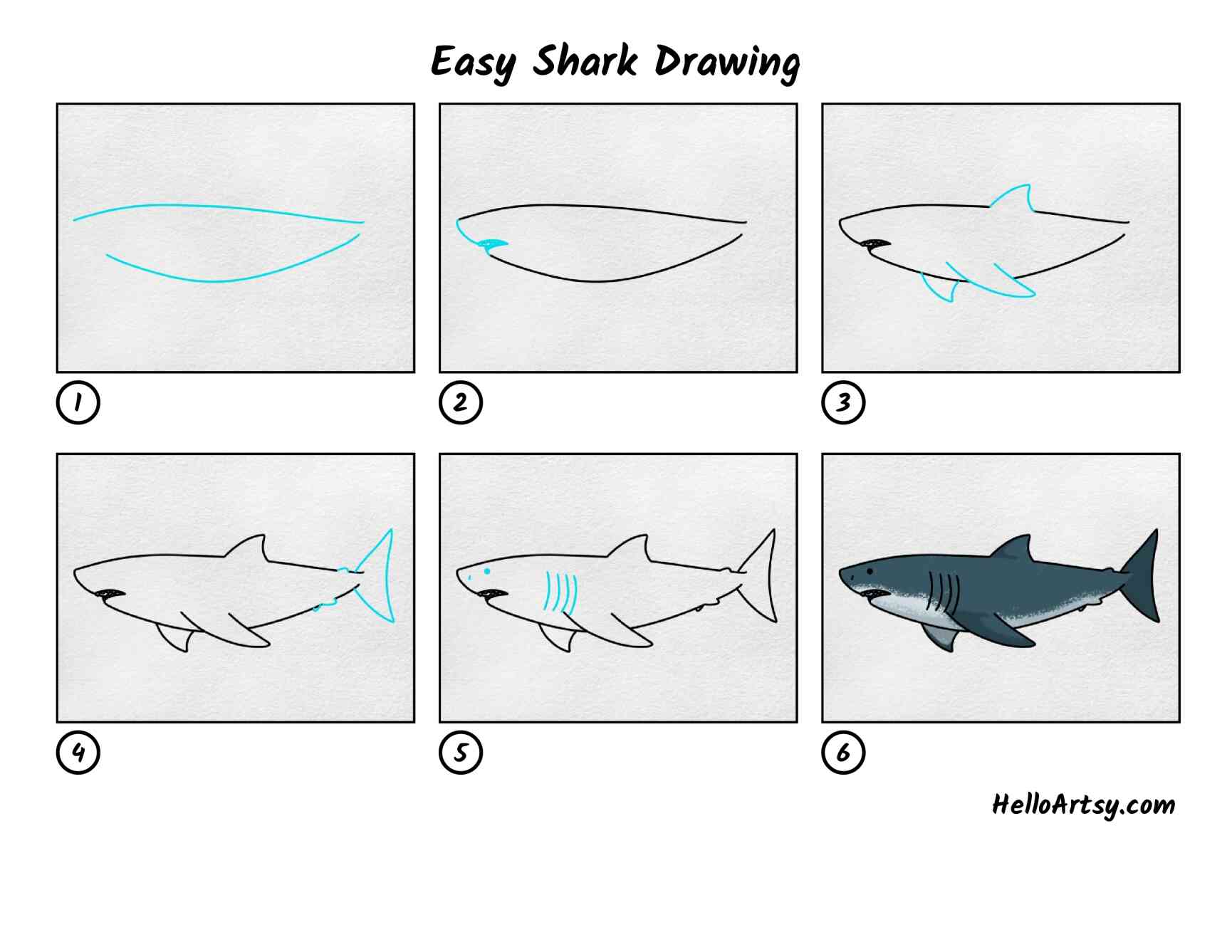 This post will instruct you how to draw a shark. We will pay attention to the shapes of each part and types of outlines drawn so that the drawing looks convincing.

Click the link below to view or download this drawing lesson. The PDF is a printable drawing lesson for Easy Shark Drawing. The last page of the downloadable PDF includes a coloring book page with just the outlines and an extension exercise for prompting kids to get creative!

All sharks are not aggressive. The more common ones are harmless.

Sharks have been around for a long time. They are some of the oldest creatures on earth-their fossils date back to about 450 million years ago. For most of their existence, sharks have been swimming in the sea, hunting for prey and avoiding being hunted themselves.

Shark attacks aren’t more common than any other animal attacks: In fact, in the last fifty years the average number of shark attacks that resulted in a person dying are less than 8 per year.

Out of approximately 500 shark species, three types of sharks are mainly responsible for fatal attacks on humans – the great white, tiger-shark and bull-shark.

There are over 500 different species of sharks and they vary in diet, shape, and size.  At the smaller end of the spectrum the Dwarf Lantern Shark is about the size of a human hand contrasted with the gigantic size of a Whale Shark which can grow to 12 meters long.

Sharks have been around for millions of years and inhabit all seven of the world’s oceans. They have been great balancers in the food chain.  Their role is mostly that of a predator and help maintain a healthy marine ecosystem.

Like manta rays and skates, sharks have a skeletal system made of cartilage instead of bone. They have 5 to 7 gills on each side of their head, as opposed to other fish that have only 1 pair of gills. They use these gills to filter oxygen from the water.

Most predatory sharks have multiple rows of teeth that fall out and grow back regularly.  These teeth vary in shape; some look like razors while some are triangular like spearheads.

The Hammerhead Shark has the distinct appearance of a mallet-like head, hence its name. This species of shark has its eyes on the far sides of its mallet-like head, allowing it to have better eyesight. This unique arrangement of their eyes makes it easier for hammerheads to hunt their prey.

Their heads also have an increased sensitivity, allowing them to find their favorite meal,  stingrays, that like burying themselves under the sand.

The Great White Shark is found in cool waters around the globe. They are apex predators and the biggest predatory fish in the world, with only Killer Whales as their natural predator. This species of shark can grow up to 15 feet long, and sometimes longer!

Great Whites can weigh up to 5,000 pounds. Their torpedo-like bodies, and strong tail fins allow them to swim through the water at an average of 15 miles per hour.

Among all the species of shark, the Goblin Shark is one of the stranger looking ones. It is a living fossil, said to have existed for millions of years, deep in the depths of the oceans. This shark has a specialized way of feeding where it extends its mouth out of its body, to reach prey.

These sharks are very rarely seen as they live at deeper, dark depths of the ocean, at around 1300 meters.