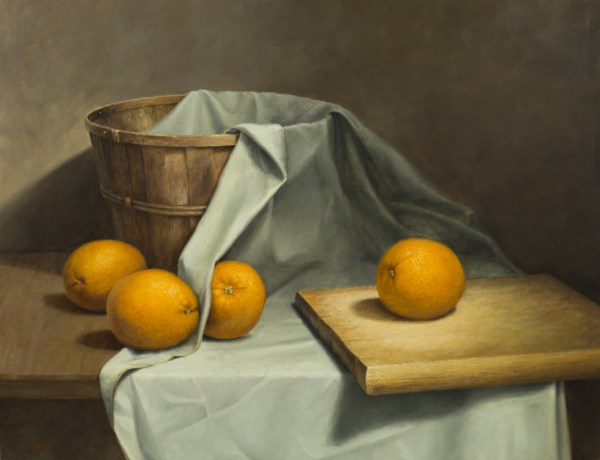 When I was in college I painted several still lifes involving vegetables you’d find in your kitchen.  At that time I was studying works by Chardin and Caravaggio.  Well here I am more 20 years later and I spent over a decade painting only landscapes and the last several years painting tools.  I had the urge to attempt a classical-style still life.  This time I would be approaching the painting with a much higher skill set ( I hoped).  I had much persistence as an artist in college but I did not have the knowledge and skills that I have now.

I know so much more about paint mixing, form realism, perspective and all the important aspects to painting a still life in oils and not only making it look convincing but looking beautiful as well.  Above all I think I’ve learned a thing or two over the years about picture making.  It’s almost hard to put into words, but the art of making pictures that “look good” is more than just about attention to detail and accuracy.  Copying a photograph is completely out of the question.  That’s the quickest way to get a boring, dead-looking painting that not only looks flat, but yearns to be nothing more than what it is; a copy.

I really spent a great deal of time and mental bandwidth designing this painting.  I did several sketches and a few poster-studies.  For those of you unfamiliar with a poster-study, a poster-study is basically a thumbnail sketch in paint.  It’s an artist’s attempt to see what the final painting could look like in full color but of course a much simpler version of the painting.  The colors need to be “posterized” in that they are mostly solid areas of color and there is a limitation in palette. – not in the limited palette sense that’s all the rage with some modern painters.  I’m not limiting myself to primary colors here.   I’m using my full box of artist colors, I’m just limiting how many varieties of each I use in the poster-study.

Below is a photograph of some of the poster studies I completed prior to starting the major painting.  The break the composition down into its basic shapes and colors – they are not meant to be refined. 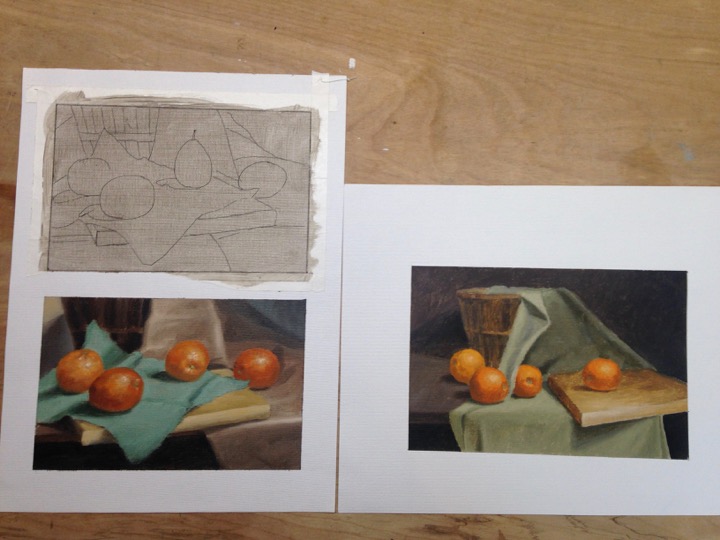 The sketches and poster studies were really helpful.  They enabled me to glimpse ahead to the final painting and rule out some poor color choices.  One of my studies wasn’t very strong and I can only imagine how disappointed I would have been if I had pursued such a painting.  (You can see that study towards the bottom left of the photograph above)

As I came up with pleasing color harmonies in my poster-studies I kept notes in my sketchbook.  I recorded paint-mixture recipes as best as I could and left paint swatches right there in my sketchbook.  This way I could find the same colors again later for the final painting.  I tend to do this with complicated paintings in which I feel I might need to re-make certain colors and especially during subject matter in which I’m unfamiliar.

Check out this page from my sketchbook: 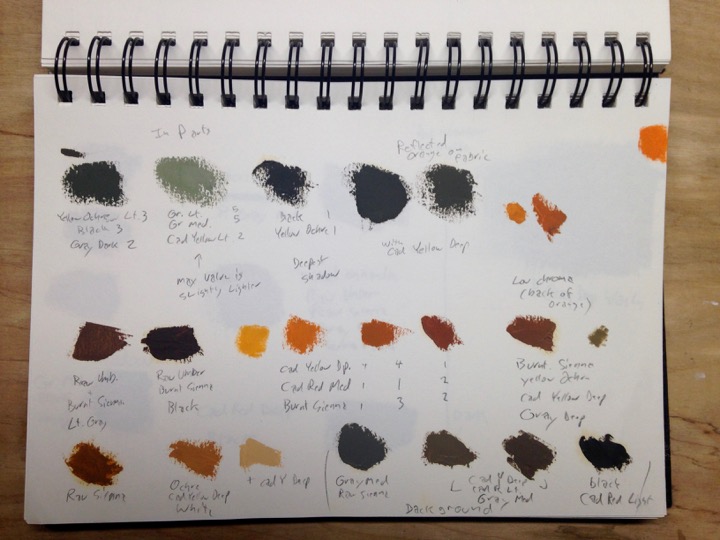 Well, the studies came and went and I finally got to work on the final painting.  At 26 x 19 inches and no detail left undone this painting was a huge undertaking compared to my usual repertoire of tools, fishing lures and equestrian equipment.

I had to repaint the oranges a couple of times.  Such an everyday object seems so easy to paint but until you actually try to render them in oil paint you have no idea how difficult they are to render.  Oranges have dimples everywhere, an overall waxy sheen and a color that can be deceiving to be quite honest.  These tasty delights were going to be the death of me but I did what I know best and that’s pursue to no ends.