It is absolutely necessary for an artist to understand precisely how to draw a cone. Cones show up everywhere in nature including human anatomy, trees, and still lifes. Follow along with this post and you will clearly see just how easy it is to draw things you are looking at!

Setting Up a Cone

To draw a cone you will want to draw a vertical line to establish the middle of the cone. Next you should construct a triangle using that vertical line which will bisect the triangle into two even halves. 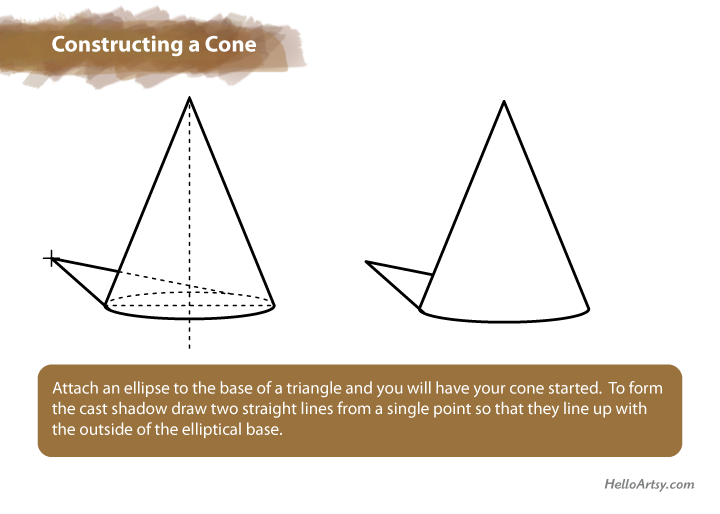 Draw lightly. You want your shading to eventually cover all of your initial lines.

To draw the base you can construct an ellipse that is precisely the same width as the triangle’s base. You only need the bottom half of the ellipse, so don’t forget to draw lightly! The cone’s cast shadow is roughly a triangular shape; to draw the cast shadow, place a point to the left of and slightly above the base. Use this point to draw two straight lines so that they pass into the outer edge of the elliptical base.

Finally, you now should have all of the lines you need to begin shading a cone, but with several extra lines. Since you drew lightly it will be a piece of cake to erase the extra lines you no longer need.

How to Shade a Cone 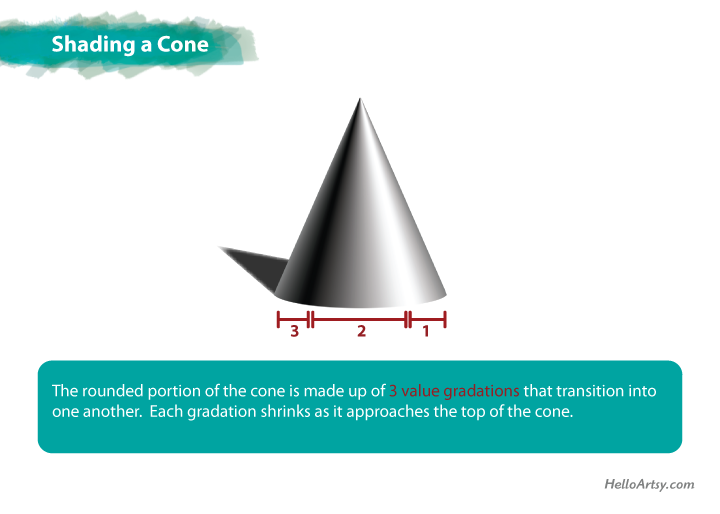 You are essentially fitting all of the same values into the cone when compared to the cylinder however, all the values get compressed near the tip of the cone.

Like the cylinder the cone will have all four components that help us see, describe, and draw the form. The lightest area on the cone is the highlight which transitions into the core shadow which is the darkest value on the form. Don’t forget about the reflected light; it is the lightened edge on the dark side of the form.

While small and sometimes hardly noticeable, the reflected light holds the secret to making the cone look very realistic.

The fourth component of the cone is the cast shadow and while its value can vary drastically, you can simply shade it in as a medium-dark value for now. You should make the cast shadow predominately one even value. For some added realism you can soften up the edge of the cone making it fade into the cone’s resting surface (table/floor) ever so slightly.

After drawing the cone you may realize that a cone is nothing more than a cylinder that approaches a point. The cone, however is one of the four basic forms and must be mastered if you are to draw any conical objects throughout our world. Some examples of conical objects: human ankle/calve, nose, tree trunk, pear, vase, etc.

Let’s Review the Parts of the Cone

By now I have pointed out the 4 components of the cone.  It’s important to be able to identify these components so that you can draw them accurately in your artwork.  Without these four components any attempt at drawing a cone will make the cone appear flat and not very realistic.  Please understand that these four components do move around depending on where the light source is located. Also, when drawing the cone each component’s value (lightness/darkness) can vary as well. 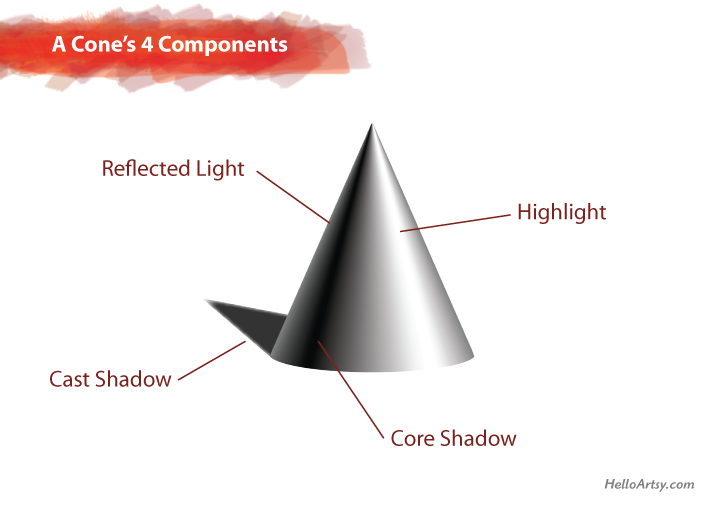 I urge you to discover cones in the world around you. You’ll seldom see a perfectly formed cone like the one I just laid out for you but, if you’re willing to look, you will see cones everywhere and if not by themselves, they will be part of more complex form. Certain fruits such as a pear are cone-like for the top half of their form and incorporate a sphere into their bottom half.  I’ll cover spheres in the next lesson.

Keep an eye out for cones and let me know what you think of this post!