This post may change your life as an artist. This will be the first of 4 posts in which I teach you everything you should know about forms whilst learning to draw. Today we begin with the cylinder…

Setting Up a Cylinder

A cylinder should be drawn with an elliptical top and vertical sides that are parallel to one another. The base of the ellipse is the bottom half of an ellipse; it should be like the ellipse you drew for the top. The cylinder’s cast shadow is considered to be two parallel edges that round off with a partial ellipse to connect each straight edge of the cast shadow. 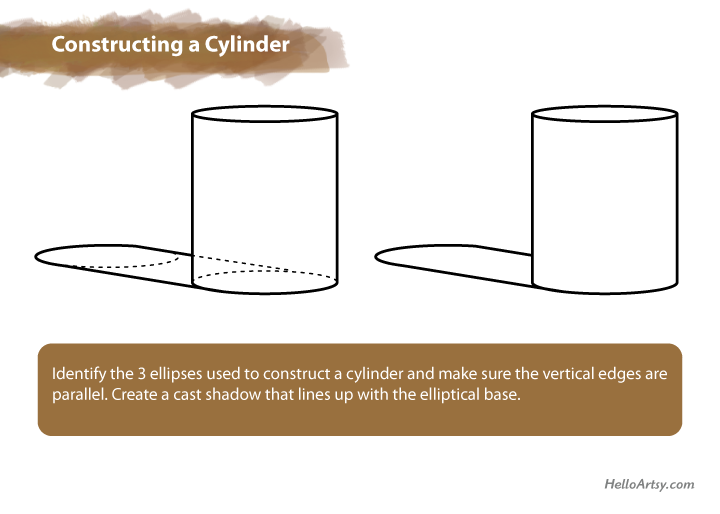 Make sure each parallel straight edge of the cast shadow lines up with the base of the ellipse even though we cannot see it in it’s entirety. In other words, don’t make the cast shadow too wide or too narrow; observe in the diagram above how the cast shadow meets the edges of the cylinder’s base cylinder.

You might find it helpful to lightly draw the base’s ellipse in its entirety and erase the top half once the other parts are setup.

Under most circumstances you will want to keep your outlines extremely light so that they disappear when you shade over them and around them in the next part: shading the cylinder.

How to Shade a Cylinder

You will never be able to shade the cylinder adequately unless you can shade even values and graded values with ease. Please check out my post on value[LINK] and brush up on those skills first if you have not already done so. I will be using many terms from that post and you will find yourself lost if you are not well versed in the subject of value.

With that in mind, try to maintain your lightest value as white and create your darkest value black.

This will make the cylinder come to life with the illusion of three-dimensions. It will also get you in the habit of using your tools to their maximum potential.

Looking at the right side of the cylinder you can see a medium value that gradates lighter until you reach the highlight, which is the lightest value on the form. In this example the highlight is pure white but that will not always be the case. While practicing let’s keep our highlight pure white.

Continuing leftward, the value should transition from the white of the highlight to a black value. The region where the value is the darkest is referred to as the core shadow. It is black here, and you should practice drawing the core shadow as black as possible, but understand that real objects might not always exhibit a black core shadow.

Now comes the tricky part. Take a look just to the left of the core shadow. Do you see it? There is one short little gradation the goes from a dark value to a medium value.

The reflected light is a sneaky little devil but that’s the part that’s crucial to making things look realistic in a drawing or painting.

For now you can shade the cast shadow one even value. Let’s make it a medium-dark value. For some added realism you can soften up the edges of the cast shadow by blending the cast shadow’s edge into the background. Technically this is yet another gradation but most artists refer to extremely short gradations as soft edges so I will do the same.

Let’s Review the Parts of the Cylinder

By now I have pointed out the 4 components of the cylinder.  It’s important to be able to identify these components so that you can draw them accurately in your artwork.  Without these components any attempt at drawing a cylinder will make it appear flat and not very realistic.  Please understand that these four components do move around depending on where the light source is located and their value (lightness/darkness) can vary as well. 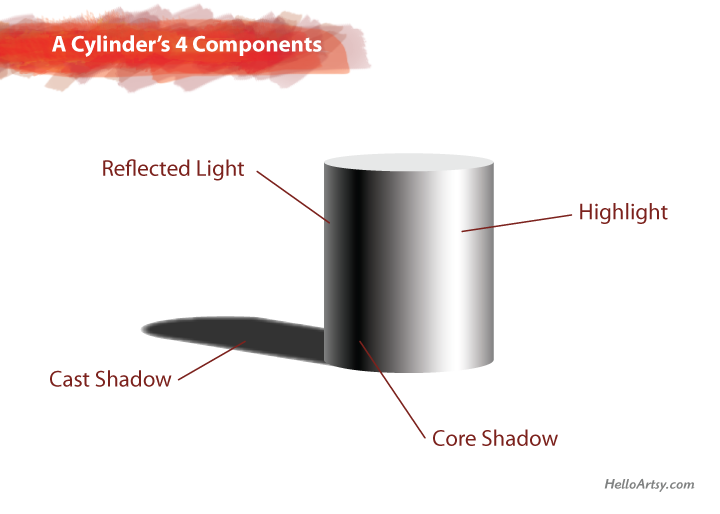 The best part about putting logic behind your drawing instruction is that your knowledge is easily applied elsewhere. Once you can draw a cylinder you’ll understand how to draw tree trunks, truck tires, arms, and legs. It’s the concept of how light makes a cylinder look that is important. All too often artists learn a few tricks but have little working knowledge of the physics behind what they are creating. It’s important to think about art and our physical world. Each time you draw something don’t forget to think!

If you made it this far you are a champ!

Let me know what you think of this article.