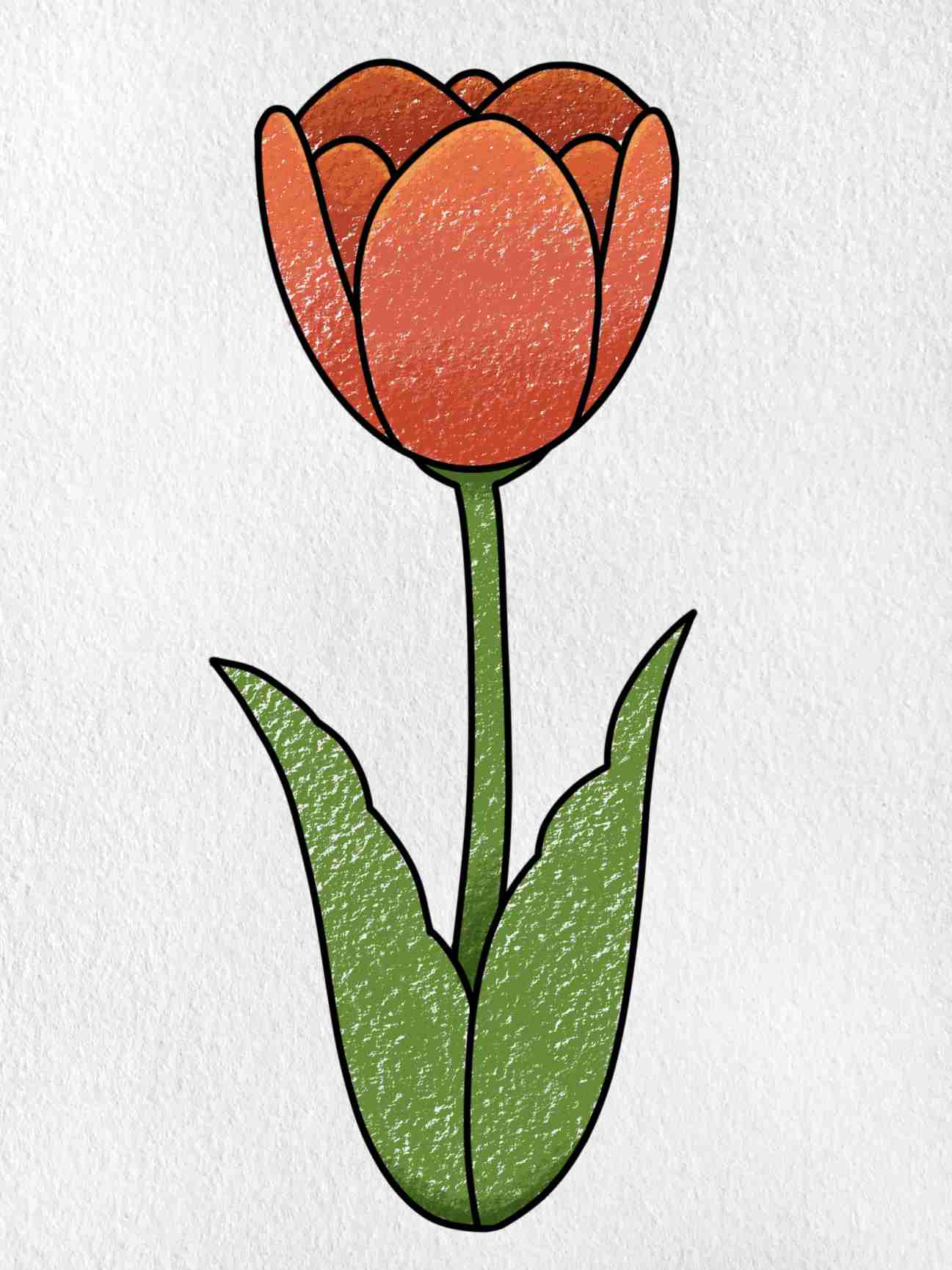 Want to experience how to draw a tulip?

Have fun with this simple step by step lesson for learning how to draw a tulip. This easy tulip tutorial is perfect for fairly young kids looking to get started with drawing.

All drawing steps are included here which make it fun and simple to follow! Plan for this drawing to require about 20 minutes, but the creative process may actually take more time if a background is added as well.

Finally learn to draw your very own flowers by following this tutorial at your own pace. Have fun! 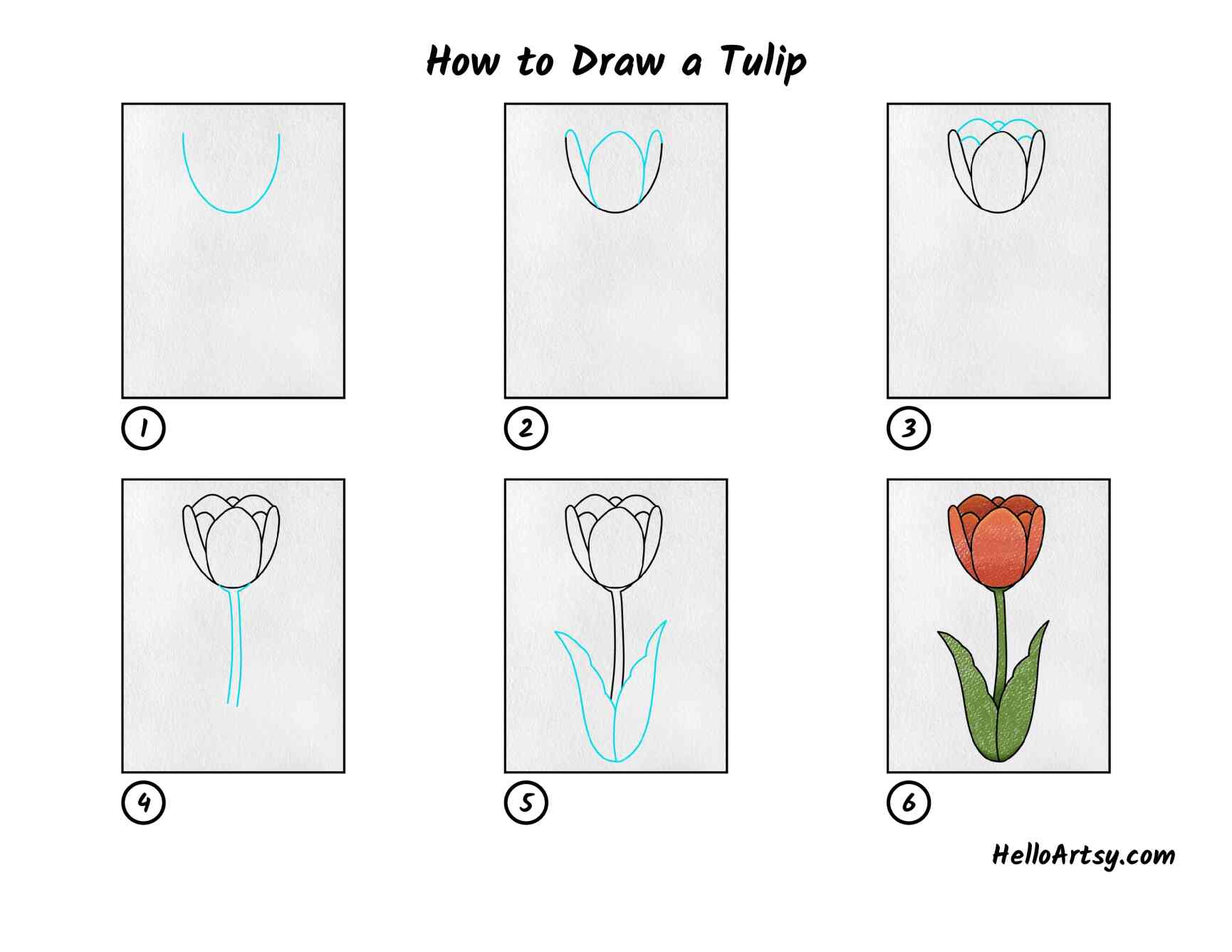 In today’s lesson, we are going to discover how to draw a tulip on paper. The design and proportion of each part will be highlighted in each step of the tutorial. Note that the blue outlines are used to indicate the new shapes being drawn in each in each of the steps.

Click the link below to view or download this drawing lesson. The PDF is a printable drawing lesson for How to Draw a Tulip. The last page of the downloadable PDF includes a coloring book page with just the outlines and an extension exercise for prompting kids to get creative!

Preview How to Draw a Tulip Drawing PDFDownload PDF

The Story of the World’s Most Famous Market Bubble

One of the world’s most famous market bubbles came in the form of the Dutch tulip bubble of the 1630s. It all started when south-east Asia was first opened up to the West by the Portuguese, and an imbalance of supply and demand arose. The Dutch East India Company’s monopoly of the spice trade in the East, along with the new-found Dutch love for the tulip, led to an explosion of the tulip bulb’s price. The market didn’t crash until the tulip bulb prices soared so high that the flower became unaffordable to the average Dutch citizen, and people began selling their properties to buy tulip bulbs.

The Dutch Tulip Bubble, one of the greatest financial bubbles in history, began in the tulip bulb market in 1636. Tulips are the most popular flower in the Netherlands, and the Dutch in particular are known for their love for the tulip, which is usually bought on St. Valentine’s Day in special red tulip bulbs.

The Dutch Tulip Bubble occurred during a period of extensive change in the Netherlands, especially in 1636. It happened in the very year that the Dutch East India Company (VOC) was dissolved, meaning that private companies no longer controlled the economy.

Other major changes during this time period include the introduction of paper money in the country, and the end of the Golden Fleece Bullion trading in the Dutch market.

The Rise of the Tulip

The tulip’s popularity continued to grow. Soon, it was the national flower of the Dutch. The demand for tulip bulbs led the Dutch East India Company to lower the price of the bulbs by shipping more of them to the Amsterdam market.

For almost 250 years, demand for tulips was very strong, so the price of tulips remained stable even though many flowers were around, and the more famous flowers were out of stock.

The Tulip Mania In the late 1630s, the demand for tulips was very strong. But after four months of rising prices, the prices suddenly dropped. This was the tulip bubble.

When the bubble burst, prices plummeted. Over the next few months, prices continued to drop and a lot of speculators made a lot of money.

Then came the crash, where tulip bulbs could no longer be purchased. Prices plummeted, causing many investors to lose their entire investments. But many others were successful – some of the top tulip traders made fortunes off the market – and in addition to their profits, they invested their money into other forms of trading.

Because of this, the tulip bubble later spread to other European markets, which then followed suit. By the time the bubble finally burst, roughly 10% of all money in circulation was involved in tulip speculation – a lot more than the current bitcoin bubble.

Tulip mania lasted almost a decade, eventually coming to an end with the tulip bulb bubble burst on 2 March 1637.

The total value of the tulip bulbs that crashed in that crash is still measured in the trillions of dollars.

The panic sent shockwaves around the world, and many other tulip bulb markets followed in the next 100 years.

Two Things We’ve Learned from the Dutch Tulip Bubble One of the most interesting things that we’ve learned from the Dutch Tulip Bubble is that there is a downside to every trend. When the tulip bubble burst, Holland saw an unprecedented fall in economic activity. That includes tulip bulb trading, which as a result all went bust. The Dutch followed this down-slide with a prolonged period of economic recession.

Bubbles All Around Us

The reason why I’ve spoken about bubbles here is because it shows that bubbles will always be around. Financial markets do an outstanding job of normalising certain assets.

How many times have we been reading articles on whether the stock market is overvalued and it won’t crash? Funnily enough, we haven’t seen an imminent crash since it was reported that the dot com bubble had burst.

What we have seen instead is that we are seeing an increase in the volatility of some market asset prices, and this makes it difficult for investors to know which stocks or commodities will really crash.