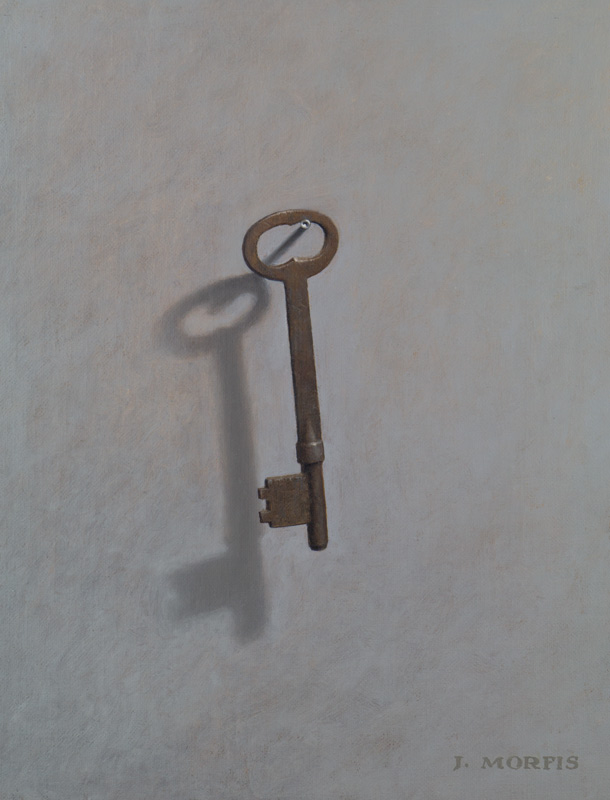 This key painting has a strange twist to it. My good friend Todd’s grandmother, Mert,  passed away and this key is connected to her.

Todd had been doing some construction work in Mertie’s house to update it before it was put onto the real estate market.  We ended up in the basement and I stumbled upon a few of these really old keys.  They were rusted over very nicely and we both thought they might make for a nice painting.  With keys in pocket and a few other items in hand we headed out.

I decided to use a formal grisaille layer for my underpainting.  I used mostly raw umber and a tad bit of yellow ochre when the raw umber got too gray and cool.  This mostly happens when there is a high percentage of titanium white added to the brown.  The titanium white is really a very light blue-purple and has a cooling effect that is only noticeable in large isolated doses.

Naturally I used mostly small brushes to paint this little key.  This is where working from a well-defined drawing makes all the difference.  If you’ve read any of my posts you know I’m a huge fan of a methodical, planned workflow.  No surprises, just good results… planned from the beginning.  I’ve been enjoying some of the interaction between a gray paint and the raw umber grisaille underneath.  It kind of makes the gray look blue, but I assure you there has been no blue added to this subsequent layer of paint (in the background).

Like the majority of my artwork, the painting was finished, varnished, framed and sent off to a gallery to be sold.

I was part of a two-man show at the Grenning Gallery in NY and the key painting was there on display with many of my other paintings.  On the evening of the opening I walked over to the “Mertie’s Key” painting after I noticed a red dot next to the painting.  Somebody had bought the painting before I even arrived to the show!  (I love when that happens!!!)

Right at this moment I reached into my jacket pocket and pulled out a card.  The card had a photo of Mertie on it! This story is 100% true.

This just about sent shivers down my spine.  Evidently I had forgotten to take the memorial card out of my pocket and the last time I wore the jacket was at Mertie’s funeral service.

Was it Mertie smiling down or was it all just coincidence?

Either way Mertie’s key had found its way into several people’s lives and left an interesting story nonetheless.