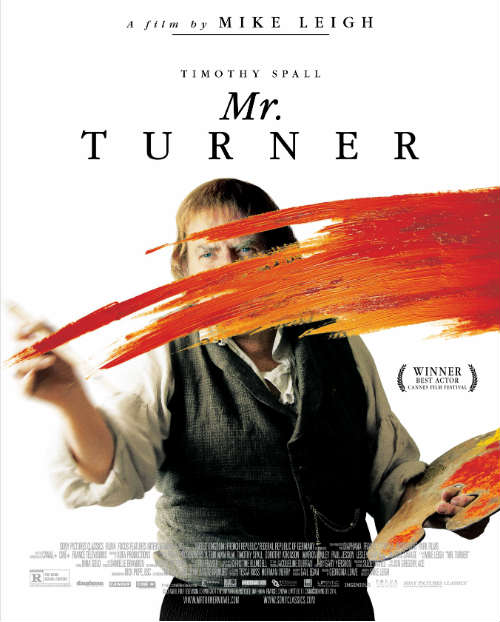 While I was in art school my college professors commonly laid out the lineage from Turner’s paintings to modern abstract expressionism. Having this glimpse into the history of painting as the aesthetic of one generation of artwork passed on, adapted and reinvented I’ve always had a slight interest in J.M.W Turner’s paintings. For such old work his paintings had such an abstract non-academy look to them when compared to his contemporaries. While I’ve never considered myself a diehard fan of his work this idea of being slightly ahead of his time has always intrigued me none the less.

Naturally I had to give the movie Mr. Turner a try. The movie cover is emblazoned with accolades but I couldn’t quite see what the fuss was to tell you the truth.  Aside from the beautiful staging and scenery, I had an enormously difficult time getting into to film because I couldn’t understand a single word spoken.   Unfortunately the main story line in the film does not have much of a narrative arc to it and again that may have been due to the language use (actually more like grunts, slurs, and groans).  There are some moments when the artist is seen doing some outlandish things in the name of his art but, there isn’t much excitement, irony or anything to keep me from yawning.

Mr. Turner seems to be a look at a rather narrow sliver of time in the later years of the artist’s life. The movie starts off with the artist, J.M.W Turner already being a prominent artist and already having achieved many accolades. The drama and story lines that unfold during the film seem to be nothing more than everyday occurrences which don’t really make for a great movie. There are no real highs or lows one would expect in typical movie-worthy story. We don’t get to witness Turner’s rise to fame or to take part in any of his struggles. Are there any? I don’t know. I was hoping the movie would share some of these.

I actually got more amusement from Turner’s interactions with the famous art critic John Ruskin. John Ruskin is one of those people whom pop up often when I read about historical artwork and more specifically how art is made and how an artist studies the science behind atmospheric effects in nature and in art. The movie made Ruskin out to be pompous and arrogant and while I’ll just have to trust the movie’s depiction, John Ruskin’s character was at least somewhat amusing.

Between the strong English dialect and the grunts made by the grossly overweight artist it was impossible for me to understand a single word in the movie. After I turned on the subtitles and read my way through the rather boring movie I did gain an appreciation for the beautiful scenery and staging that unfolded throughout the film.