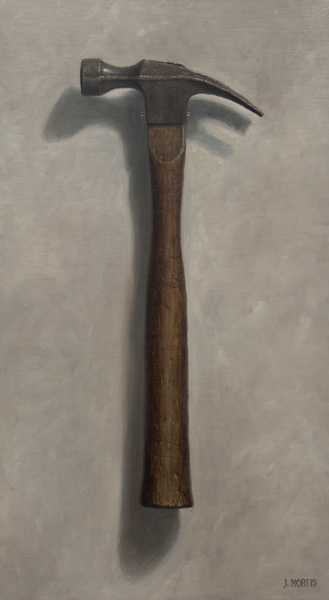 This hammer was yet again one of those items that hung around my father’s workbench (no pun intended).  Positioned somewhere amongst the clutter in front of the family station wagon in the garage this was one of the weirder looking carpenter’s hammers.  With its claws useful for removing mistakes from my childhood wood-working mishaps, this hammer had a peculiar line sculpted along its metal head.  I realize now that this hammer’s head had been casted and that protruding metal line was evidence of the casting method.  Having created a few cast sculptures in my day I recognize the characteristic material that oozes out in between the two halves of the mold used in the casting process.  It’s an old Stanley hammer and has some savory chips and rusty spots; things I wouldn’t dare change for they make the most interesting paintings.

It often surprises onlookers with how few colors I use when painting still lifes of old tools such as this old cast hammer.  There are two metals involved, that being the hammer’s head and the two nails fixing it to the wall.  There is also the wooden handle and the entire background to be considered.  These four elements still only command a small range of oil paints.  I typically use about 4 earth tones, several neutrals (black, white, grays), and a blue.  I currently use a small hand held wooden palette to compete my tool portraits.

Like all my tool paintings, this hammer started with a detailed line drawing on paper.  Next, that drawing was transferred to canvas before the painting even started.  This happens to be the painting I used for my demonstration on how I transfer drawings to canvas and can be seen here.

Let me know what you think below!