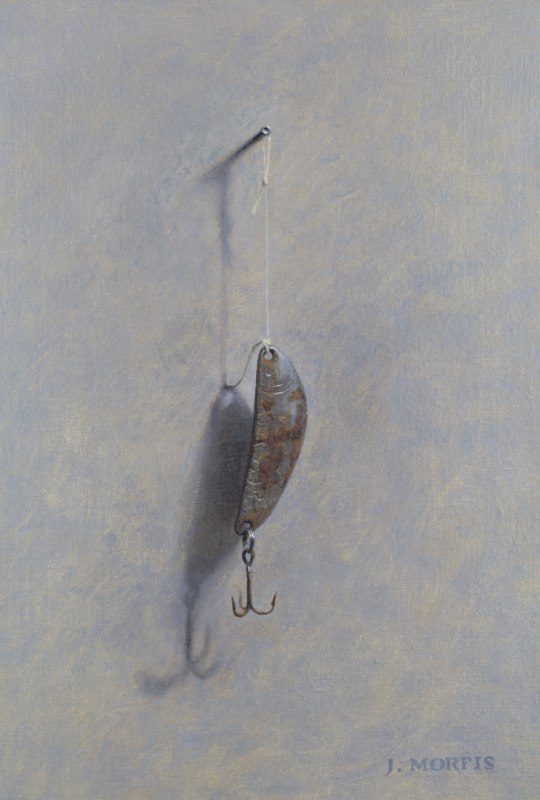 This is yet another fishing lure find from my old tackle box. This old snapper lure has much rust on it which is one of the reason I was interested in painting it in the first place.

I’ve mentioned numerous times in previous posts how most of the shiny lures simply reflect the artist (me) in their mirror-like finish which can pose somewhat of a compositional problem. This lure did no such thing however.

Upon closer examination I noticed this lure had a fish-like resemblance etched into the side of it. I’m not sure whether they stamped this design into the metal or whether they scratched it out… perhaps even cast it.

But there is an eye, the markings of a fish’s gill and a pattern of scales going down the side of the lure. What was interesting was the way the edge of this pattern got picked up by the light source every so often. The fish design would disappear into the rust and then emerge when the metal was shiny enough and when that specific angle of the design-edge was very much tangent to the light source.

With a very neutral palette and the occasional use of some earth colors I worked my way through this painting with some very small brushes. Much of it was painted with 0 and below. Yep we’re talking about 2×0 and 3×0 (double zero and triple zero brushes)!

You can probably see some of the underpainting coming through.  I worked in a very traditional fashion for this one… I painted on top of a raw umber grisaille.