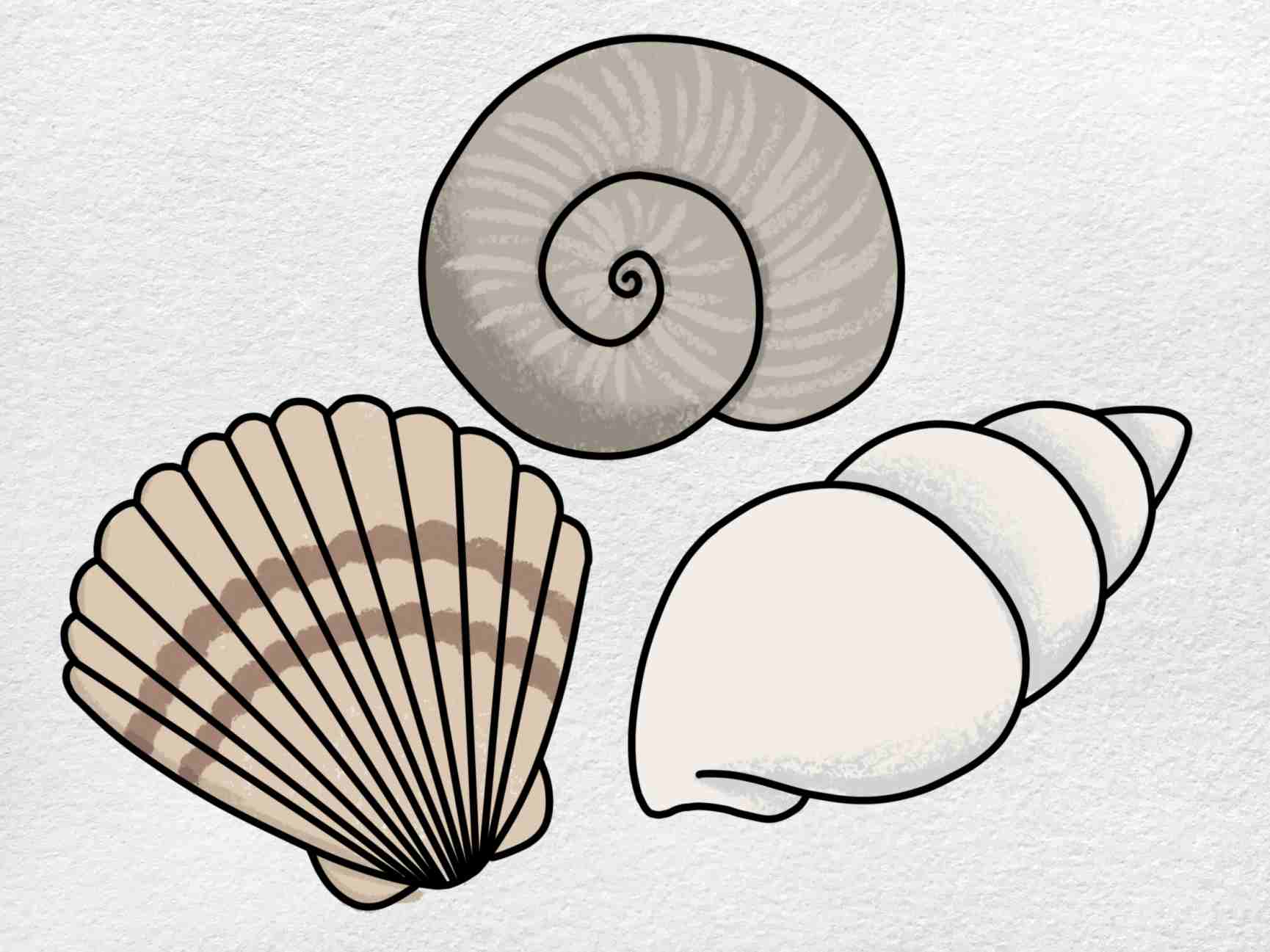 Need to demonstrate to a youngster how to draw a sea shell drawing?

Included are 6 easy steps to follow, children will enjoy making their own sea shell on paper. Also included is a downloadable version of this sea shell drawing lesson.

Ideal for art teachers and homeschoolers looking to instruct kids how to draw a sea shell.

Trying to learn to draw is much more fun when you have a fun & easy lesson to reference. Enjoy! 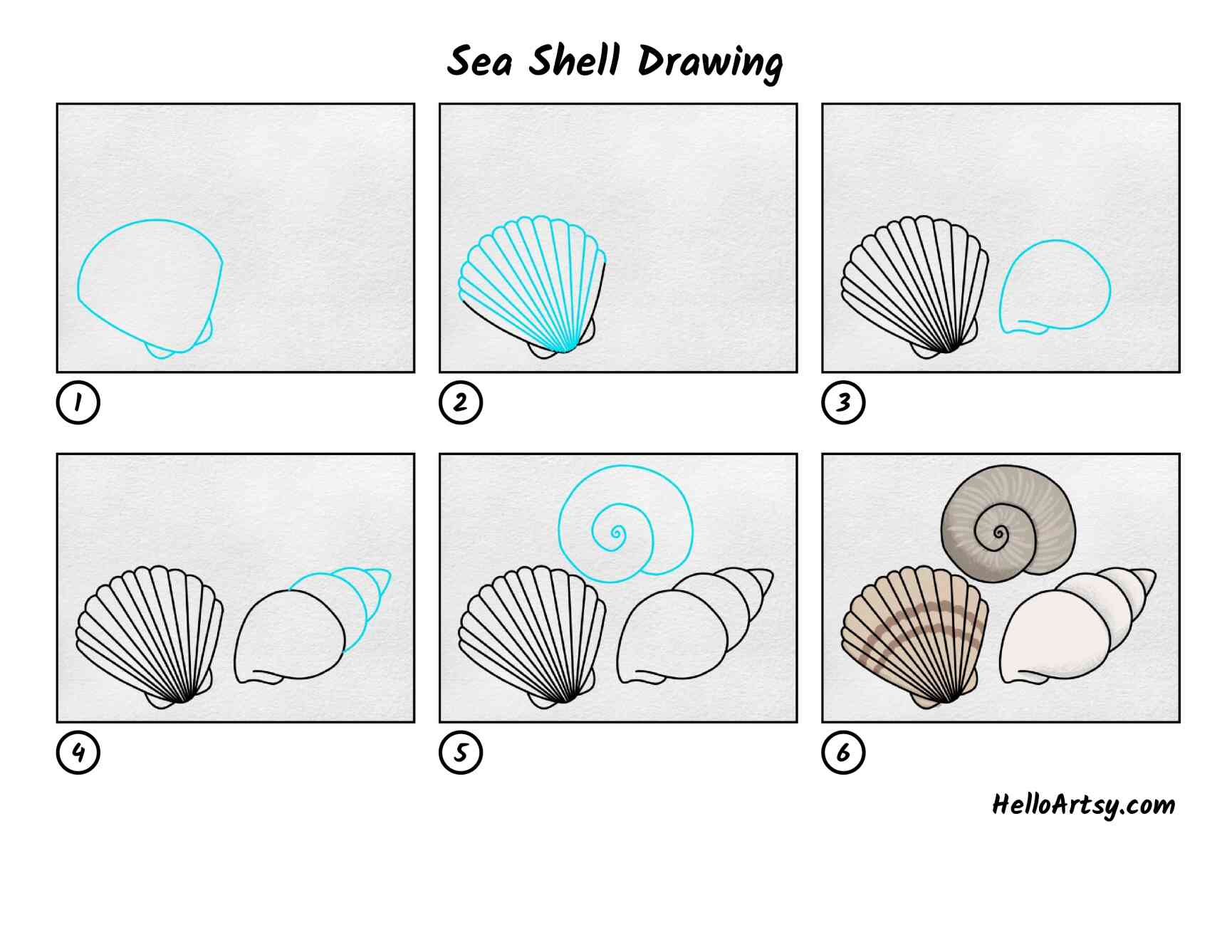 In this step by step lesson, we will learn how to draw a sea shell drawing on paper. To ensure the artwork is successful, we will consider the various sizes and shapes of each part of the sea shell. The new lines in each step is made of blue so you can observe the most recent shapes that you should be working on.

Click the link below to view or download this drawing lesson. The PDF is a printable drawing lesson for Sea Shell Drawing. The last page of the downloadable PDF includes a coloring book page with just the outlines and an extension exercise for prompting kids to get creative!

Seashells by the Sea Shore

Sea shells are the sturdy homes of marine gastropods which means they belong to a class of mollusks that use a type of foot for movement. Their shells are often found on beaches around the world.

Every seashell is unique in different ways. They are like fingerprints and it is impossible for two shells to have the same markings. They can tell us when the sea creatures were alive, how old they are, where they live and what kinds of things they ate!

Different seashells have different shapes and sizes. The most common ones found are a cone, spiral, bubble or an oval shape. Sea shells can be simple or they can be elaborately decorated with patterns that tell a story about the life of its inhabitant.

Have you ever collected seashells while on the beach?

Sea shell collecting is also popular. Humans and sea shells have had a long relationship. Sea shells are an important part of many coastal cultures. They are used as decoration and in art.

The shells also have practical applications such as serving as homes for hermit crabs and other little creatures that borrow these sturdy and beautiful shells for shelter.

Seashells are made by what we call mollusks, and are usually their homes until a different animal comes to live in it once they’ve moved out. Different kinds of animals use these colorful shells as both protection from other marine life and as homes to live in.

Where Do They Come From?

Seashells are most commonly made by mollusks. Mollusks are usually snails, clams, oysters, and other sea creatures that need hard protection. These seashells end up on our beaches once a mollusk has moved out and no longer has use for their shells.

There are hundreds of different types of seashells that wash up on beaches. We’ll be going over some of the prettier and more commonly found seashells by the beach.

These shells are commonly spiral and pointy at the end and are usually some of the prettiest shells you will come across on a beach. .

This type of shell is commonly found in warm waters with sea snails living in them. Cowrie shells were once used as a type of money to buy and trade products with. These shells are commonly used as pieces for jewelry due to their beautiful colors and patterns found on its glossy surface.

These shells are the most common type of shell found on the planet. Bivalve shells can be found at either the deepest depths of the ocean or the shallowest of streams. They have wonderful, varying patterns and colors but all have two shells that hinge open and close.   Clams, muscles and oysters are an example of a bivalve seashell along with cockle shells pictured below.

Seashells can sometimes be thousands of years old, and the animals who used to live in them have already moved on to more suitable seashells.

Seashells can also be home to hermit crabs who use this as protection– once a hermit crab grows, they look for a bigger seashell to move into.

When you’re out and about on the beach or a family vacation by the sea, try collecting pretty little seashells and you might find one as a perfect souvenir for your visit to the shoreline!