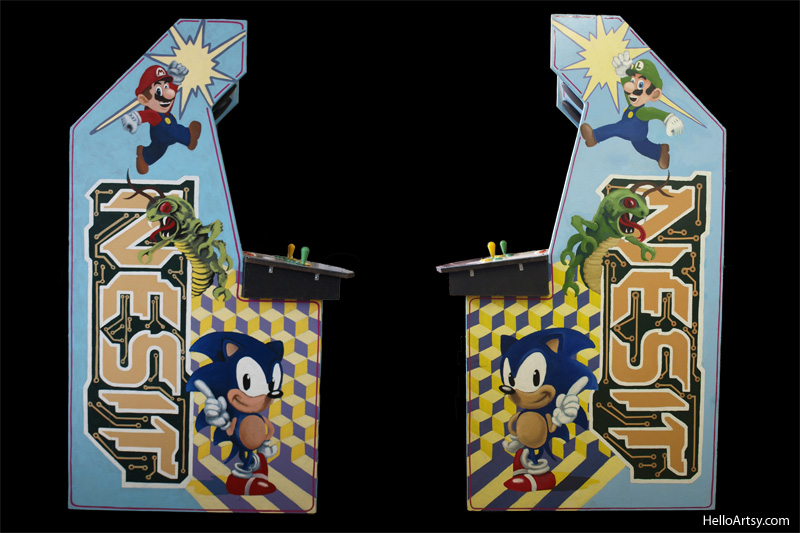 I decided to give the arcade machine at the makerspace I hang out at a custom paint job. Because Many of our members were around for video games in the 80s and 90s I figured I would give the machine a bit of a nostalgic touch!

The first thing I did was measure out the arcade machine and recreate a vector drawing in Illustrator that mapped out its shape precisely to the inch, very much like a blueprint.

Next I located any images from the classic video games of my youth. You can see in the finished photos how both Mario and Luigi from Super Mario Bros. made the final cut, as did Sonic the Hedgehog and Centipede. Once I amassed a sizable file of digital images I went to work in Adobe Illustrator. I explored various compositions using the digital imagery along with our makerspace’s logo. Eventually I found a pleasing design for both sides of the arcade machine.

I hooked up a projector to my laptop and displayed the illustrator file onto the arcade machine itself. This had to be done from really far away but, fortunately the space I was working in was large enough for the task! Once the display was lined up and to scale on the side of the machine, I traced all the important edges and lines; stuff I would need to create the painting.

Using acrylic paints I painted the darn thing using brushes! I worked at this for several Saturdays and enlisted some help along the way thank heavens (Thank you Rich). Several areas had to be double and even triple coated. The painting was done one side at a time with the arcade machine laying on its side for convenience.

Once I had both sides completely painted and things were several days dry I decided to add a protective top coat to the video game machine. This project took so long to paint there was no way I wanted it to get damaged by some aggressive video gamer. I rolled a coat of lacquer on one side letting it thoroughly dry before flipping the machine and lacquering the other side as well.

Once all the lacquer dried I lightly rubbed some steel wool over the dried lacquer just to reduce the sheen from a glossy to a satin finish. Next, I striped all of the edges with one shot sign painter’s enamel. If you have never used one-shot it’s perfect for striping things. This gave the machine a more finished look and composed all the characters better.

Hooray for the Arcade Machine!

The custom painted arcade machine was received very well and has a prominent location in the space. This project took way longer then I expected and I won’t be getting into the custom arcade painting business anytime soon!