Want to learn how to draw? A great way to start out drawing is to use something you are already familiar with such as graphite pencils. You most likely have some graphite pencils lying around so that’s one less thing you need to buy. You can get started today!

In this post I will sometimes use the term “pencil”, but just know that I am actually referring to graphite pencils specifically and the kind with the wooden body, not a mechanical pencil. One must be cautious when using the term pencil because nearly every drawing material (and some painting media) comes in a pencil form. One trip to the art store and you’ll find pastel pencils, charcoal pencils, even watercolor pencils! These materials are very different than your standard graphite pencil which I’ll be referring to for the rest of this article. A graphite pencil contains a mixture of clay, graphite, and wax. Those three materials is what makes up the pencil “lead” and allows it to make marks on a piece of paper, the lead being the dark part in the center that is exposed as a point or tip.

Did you know that graphite pencils come in an assortment of grades each having different properties? Once I introduce you to the pencil scale and tell you how to use a collection of pencils you are going to be able to leverage this vast selection to make your artwork not only look better, but take less time on each drawing as well! Take a look at the pencil scale below. 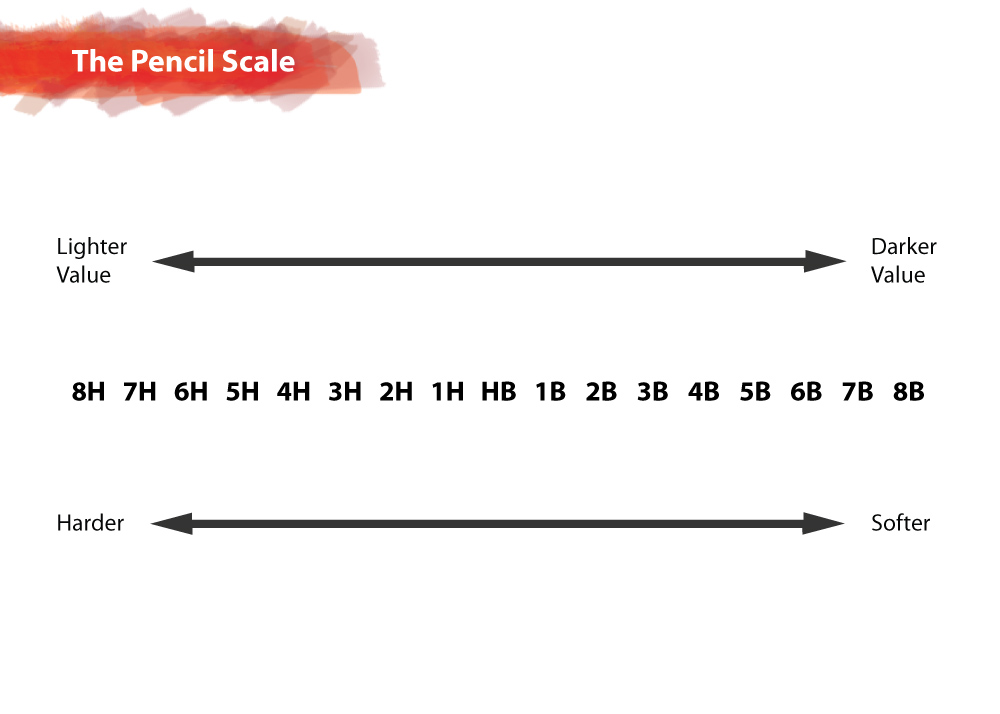 The pencil scale describes the physical properties that each pencil exhibits. This is powerful information because knowing what each pencil is capable of can help you intelligently select different pencils at different stages of your drawing which ultimately makes your job as an artist easier.

After studying the pencil scale you’ll notice that darker pencils are also physically softer. This is important to understand. This means that a 6B pencil will be capable of making darker marks than a 2H pencil, but the 2H pencil will retain its point longer.

I recommend that you purchase several pencils that span the pencil scale, but favor the B pencils. For instance, I think you should keep handy the following pencils: 4H 2H HB 2B 4B 6B 8B. This will give you a nice range to work with and easily allow you to create beautiful drawings that contain rich darks and loads of details. Why not get all 17 pencils? You don’t need them. There is very little noticeable difference between two adjacent pencils on the pencil scale and having to search through 17 pencils over and over again wastes time.

Be careful when using some of the harder pencils (H pencils). The harder a pencil is the more likely it will scratch up your paper. Often you will not realize you have scratched your paper until you are shading on top of the scratches later; on only to find ghostly white lines appearing. In most cases it’s actually better to develop a light touch with an HB pencil than to use any H pencils at all. But we’ll keep a 2H pencil and a 4H pencil around just in case.

Help, I can’t Sharpen My Pencil

Have you ever tried to sharpen a pencil, but each time you get close to finishing the job, the tip falls off? That is typically caused by a segmented pencil lead. Pencil leads will get broken up into smaller pieces if the pencil is dropped often or banged around too much. Don’t play table top drummer with your pencils. 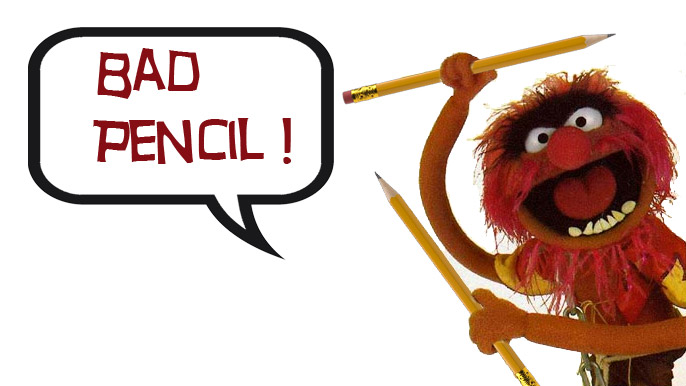 Have you every sharpened a pencil only to find the tip is mostly the pencil’s wood and not the lead thereby preventing you from drawing with it? Sometimes pencils have a pencil lead that is not perfectly straight. This warping in the pencil’s construction will cause a regular pencil sharpener to fail. I must admit, this is usually only a problem with cheap, inferior pencils, but if you do run into this problem it’s best to sharpen them by hand with an extremely sharp utility knife.

Other Forms of Graphite

While I do not recommend beginner artists using anything other than an assortment of regular graphite pencils there are many other forms of graphite that can be used independent of or in conjunction with regular graphite pencils. Mechanical pencils, while slower to shade with provide a consistent ultra thin point thereby making them fantastic for detailed work. Imagine removing a pencil’s wooden casing altogether and increasing the width of the pencil lead. The result? A woodless pencil. Woodless pencils are giant pencil leads usually surrounded by a thin plastic skin. This form of graphite can really lay down very large marks very quickly. Need to draw even larger, faster? You can even buy a container of powered graphite which may prove useful when shading large areas such as when an artist wants to tone their entire paper at the start of a drawing.