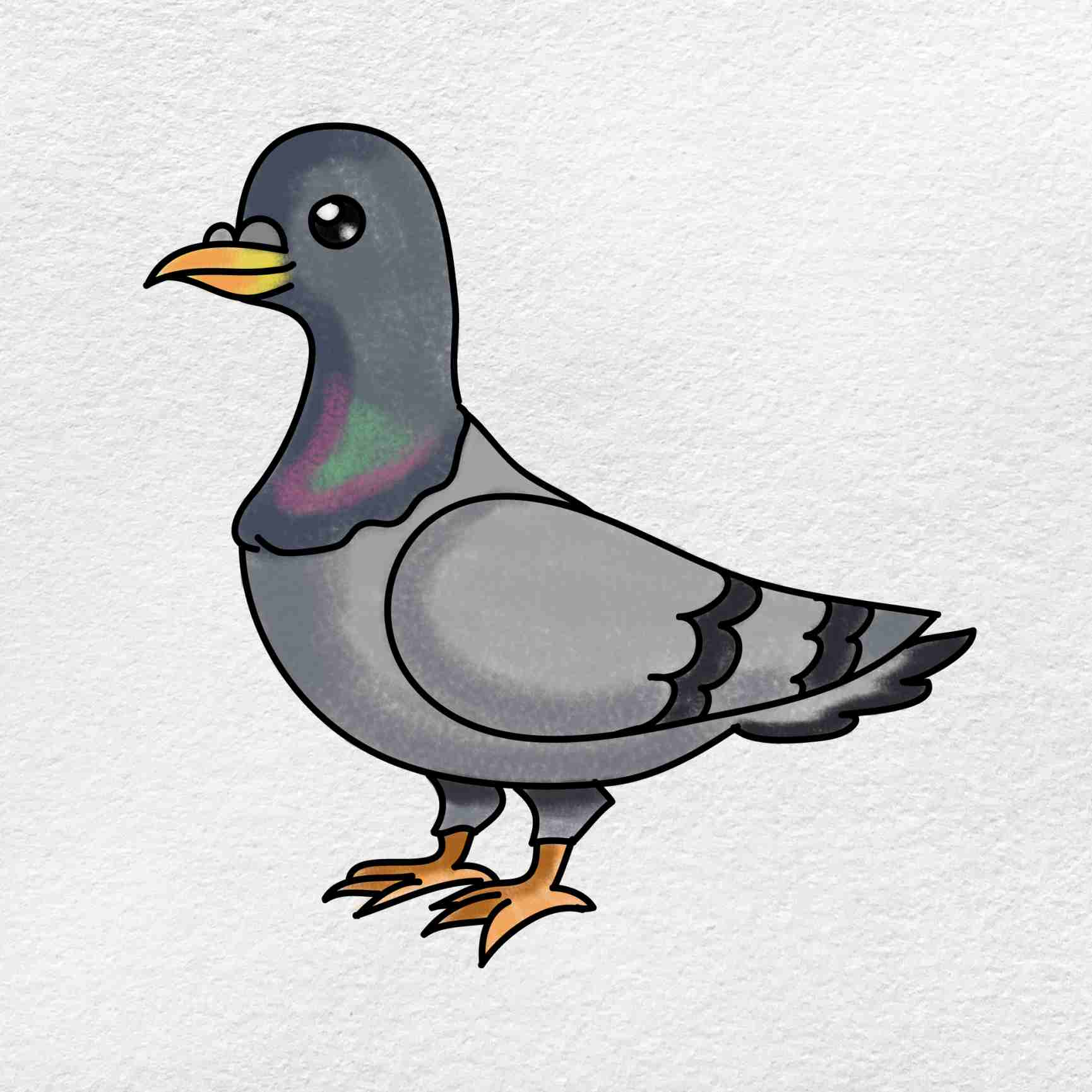 Children will love learning how to draw a pigeon in 6 simple illustrative steps.

Everyone will like this simple step by step lesson for learning how to draw a pigeon. This easy pigeon instruction guide is perfect for young children looking to learn how to draw.

All drawing steps are included here which make it fun and simple to follow! Plan for this drawing to take about 20 minutes, but the art-making process can actually take longer if a background is drawn as well.

Finally learn to draw your very own birds by following this lesson at your own pace. …and now for the how to draw a pigeon lesson… 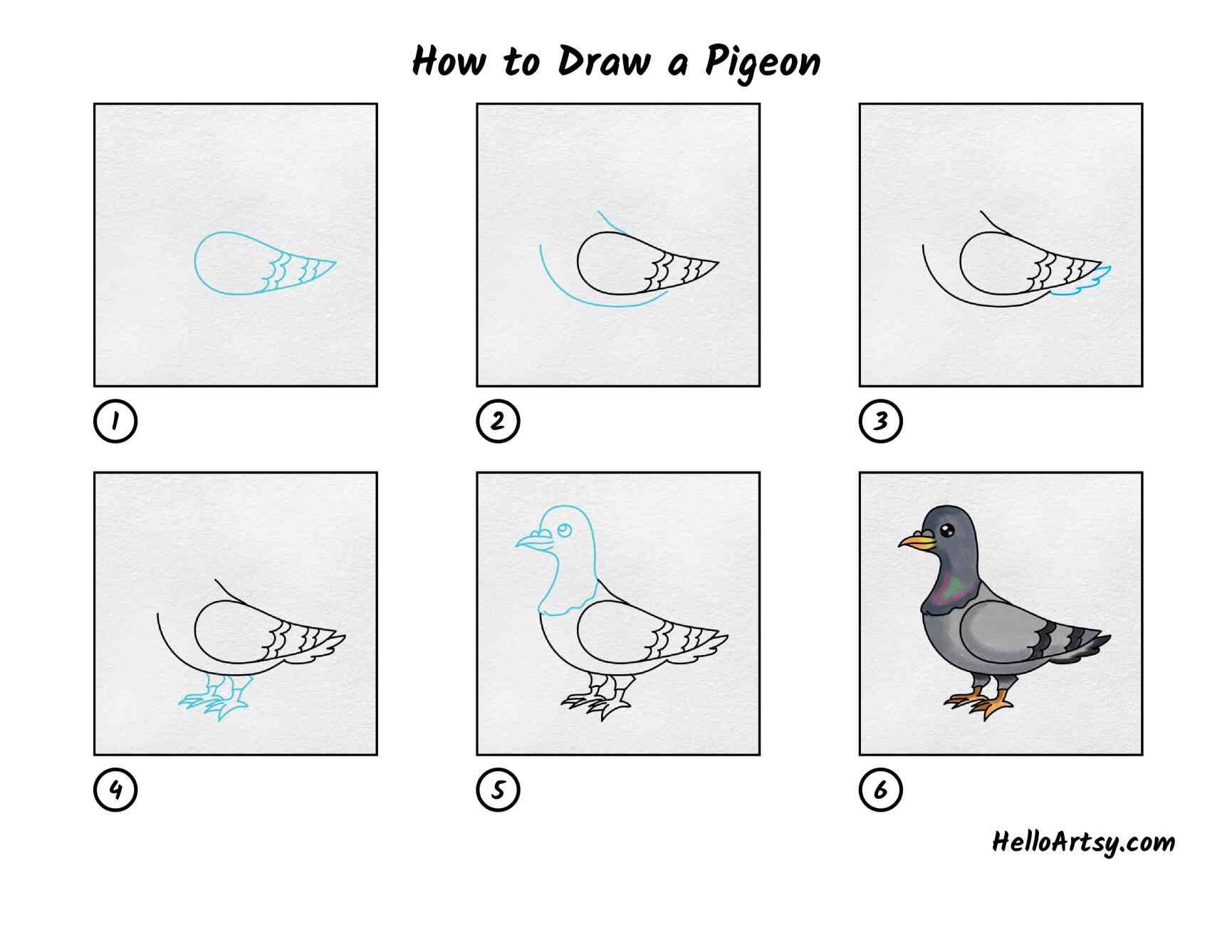 This step by step lesson will teach you how to draw a pigeon. We will pay attention to the shapes of each section and types of contours drawn so that the drawing looks correct.

Click the link below to view or download this drawing lesson. The PDF is a printable drawing lesson for How to Draw a Pigeon. The last page of the downloadable PDF includes a coloring book page with just the outlines and an extension exercise for prompting kids to get creative!

Preview How to Draw a Pigeon Drawing PDFDownload PDF

Commonly known as “pigeons”, rock pigeons have different colors due to breeding by humans. They are actually the bird descendants of the wild Rock Dove which resides in Europe.

Male and female pigeons pairs stay together for life and often have several families of baby pigeons in a single year. The nest of these birds can be found along building ledges, rafters, beams, under bridges or inside barns.

Pigeons are ground feeders, so while you are more likely to find them underneath a bird feeder rather then on the bird feeder itself like most other birds.

There are few birds that have been so closely associated with humans as the pigeon. It has been domesticated and taken around the world, raised for food, trained for carrying messages, as well as used in research.

Originating in Europe, North Africa, and India, this bird is now found in many cities all over the world. In some places, the pigeon has returned to its wild habits, nesting on cliffs nowhere near humans or cities.

The pigeon holds the title for one of  the first domesticated birds that dates as far back as the Mesopotamians. Records of the pigeon were found on clay tablets around 5,000 years ago. They’re even believed to have been around and getting along with humans as early as 10,000 years ago.

Pigeons are one of the most common birds found in the United States, living almost anywhere you go. They were brought by European colonists to America in the 1600’s but some escaped into the wild. Ever since then, their numbers have multiplied to what they are today.

These hard working little birds are plump and have short legs. Like dogs and horses, selective breeding has given the pigeon a variety of patterns and colors on its feathers. Often seen to be black, gray, and white. The pigeon has also been seen to have shimmering feathers on its neck in the colors of purple and green.

What do Pigeons do?

Despite being called “rats with wings”, pigeons are a lot more helpful, and certainly more pleasant to see than an abundance of rats! Here are some reasons why:

They’re great navigators! Pigeons have been used for sending messages throughout history. Well recorded instances of this was the use of pigeons to save humans lives in both major conflicts in the 1900s. These avian heroes were even used to rescue 194 stranded U.S. soldiers in October of 1918.

Pigeon’s main diets also consist of insects. With the sheer number of pigeons found in America and around the world, they have been a great help in pest control. They regulate the population of insects and contribute to helping balance the food chain.

These birds are sanitary officers of the streets. Pigeons are known to gobble up food that we humans unnecessarily leave around. From leftover sandwiches to food we accidentally drop on the streets, it won’t be long until a flock of pigeons come swarming in to clean the mess up.

Pigeons are relatively smart animals. They have been taught to not just deliver messages from point A to point B, but also other things you wouldn’t expect! Science has proven that these birds can be thought to differentiate art and even letters and words with just a little training.

These birds interestingly produce ‘fake milk’. Both male and female pigeons produce a white-ish fluid, called ‘crop milk’. Crop milk contains nutrients, antioxidants, and protein. This milk is fed to hatchlings for around 4 weeks or so.