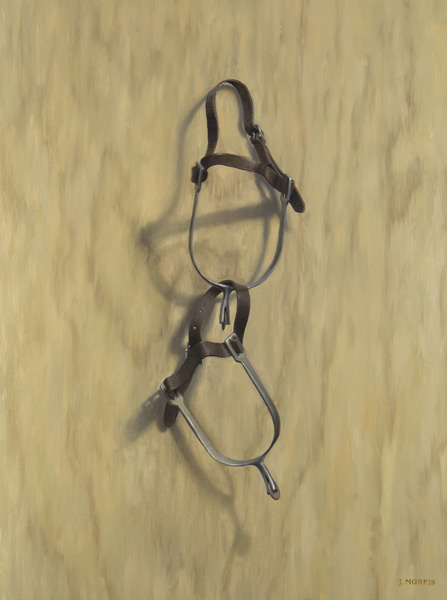 If you’ve been following along with my painting career you’ve definitely seen me paint several pieces of equestrian equipment.  It was only a matter of time before I encountered a nice pair of riding spurs.

These are apparently of the English riding tradition as opposed to the Western riding style.  I’ve learned that western spurs are those ones with the points.  You know?  Those typical spurs you see in all the movies and in cartoons that depict cowboys!

I spent a considerable amount of time setting up the spurs to create what I hope is a pleasing composition.  Amongst the two separate spurs, their straps and complex arrangement of metal I had many confusing options to choose from during the setup phase.  Also under consideration was the perspective any unknowing viewer might have of the spurs painting after I painted it.

This is something I would think every artist deals with but I’ve never heard any of them talk about this.  The fact that we are creating an image and there may be some confusion as to what is happening in the composition.  I’ve found myself arranging still life items to tell a clearer story to the viewer.  This is true even when setting up objects to look “found” or “randomly placed”.  Much thinking and arranging goes into even these kinds of arrangements.  It turns out random isn’t random after all, but any mathematician would probably tell you the same!

This painting was a technical feat in that the spurs were quite difficult to draw accurately.  There’s also the notion that there’s two seemingly identical ones.  Anytime this happens in a painting the artist has to take particular care in rendering each item identically. This is to ensure a passing inspection to a viewer with a critical eye.  It’s easy for a critic to play the comparison game.  So there was some pressure on me to get this symmetry correct.

Here’s a detail of the painting showing the topmost buckle. 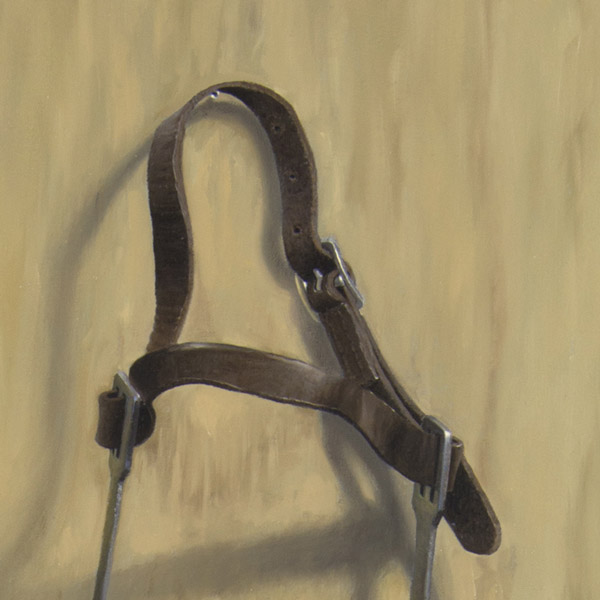 The composition for this artwork marks a drastic departure from my usual compositions in that I choose to paint wood grain behind the spurs.  I usually resort to a neutral background – both neutral in color and subject matter as to not take away from the focus of the main subject matter.  This time I wanted to try something new and hopefully the wood grain doesn’t take away too much focus from the spurs.

At 24 by 18 inches and with all the detail involved this painting took a really long time to complete.  How many hours?  I have no idea but, its undertaking involved around 12 painting sessions.  I usually complete a painting in 4 sessions.