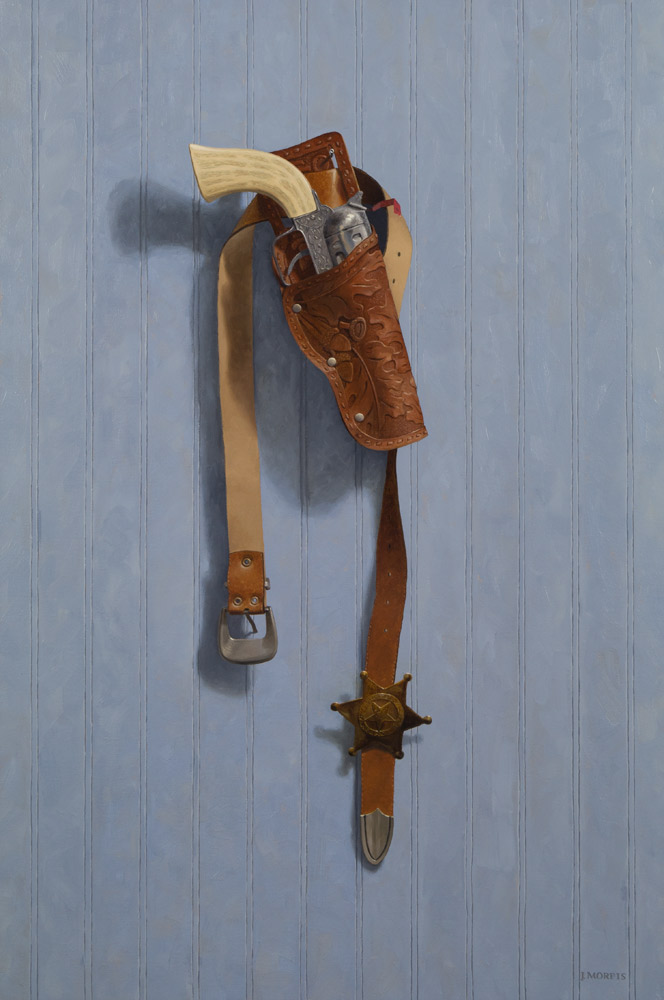 So here I go with another toy gun painting.  Realize I’m not especially into toys and I’m certainly not a gun collecting nut-job but I couldn’t resist painting yet another classic cap gun.

This all encompassing cap gun getup was given to me from my Aunt Jane.  She lives next to my parents and I get to spend time with her whenever I visit my parents.  My aunt Jane told me that this was part of her cowgirl costume from when she was a kid.  It’s cute in a homemade way you rarely see these days.  It’s a costume that is pieced together from seemingly found toys and parts.  I mean the badge didn’t come with the toy gun.  The belt is just an old leather belt and the holster is probably from another toy altogether and so on.  I think people were more creative way back when.  I think many people are quite lazy today and want everything packaged up and delivered right to them.  Just my macro observations, sad but true.

So more about this painting…

Actually the holster looks like leather but it’s this strange pressed rubber type of material.  It has an interesting pattern of leaves and acorns that are raised ever so slightly.  The holster was good fun to paint, and I made sure to premix up paint strings on my palette beforehand so that I could effectively model those forms.  For the most part I start with a color and build up a series of paints that are both lighter and darker.  5 steps tends to be my starting place for pre mixing. I took a similar approach to the raised brass pieces on the star pendant thingamajig.  Actually it’s a pin.

If you look carefully at the toy gun’s hammer – I think that’s what it is called?… the part that smashes the red cap paper.  It had so much use it was eroded and the tip was broken off.  It’s just a tarnished stub.

If you are thinking this whole painting  took a long time to paint you would be correct.

This was a very laborious piece of artwork to get through.  Don’t even get me started on the beadboard in the background, every time I paint those backgrounds there is a point at which I want to scream and jump out the window. Every time I paint a beadboard background I have surely invested in back pain for a couple of weeks.  Hunched over painting tiny shaded lines…yep it’s literally painful.  It’s such a slow process, but I can’t resist it because I think it does create a really nice background!  Plus it’s something just a bit different from my usual gray backgrounds.

You have got to change things up every now and again right?