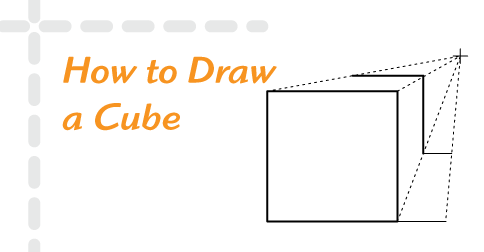 Possibly one of the easiest forms to shade, the cube does prevent a couple of challenges. Today I’ll help you discover some of the mistakes beginner artists make when attempting to learn to draw.

Since a cube is geometric in form it does make logical sense to use a system of perspective to draw the cube. I don’t want to turn this into an article about drawing perspective right now, only because that will become too lengthy of a discussion and dilute the focus of this series of articles which is how to shade forms to make them look realistic and 3D.

If you’re just arriving here now and want to learn about all four basic forms you can start at the beginning of this series and catch up:

Setting Up a Cube 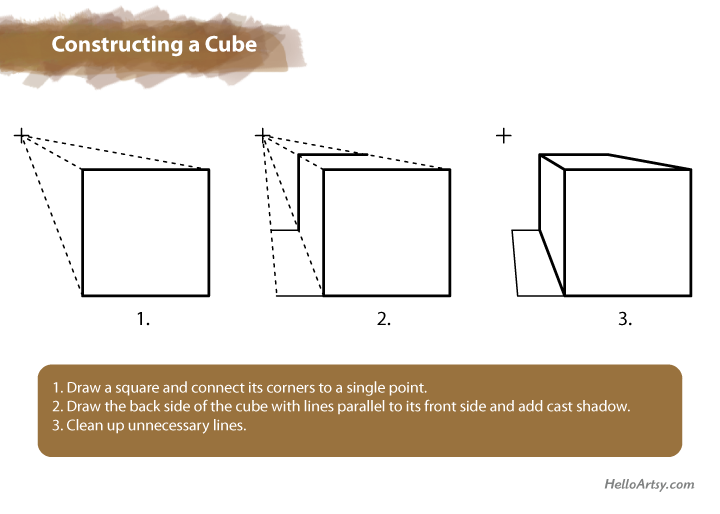 As always, draw your outlines lightly because you’ll want them to disappear by the time you are finished shading in the cube. Outlines will detract from the overall realism of the drawn cube and are just there to guide you at the start of the drawing.

How to Shade a Cube

The shading of the cube deviates drastically from the other, rounder forms such as the cylinder, cone, and sphere because the cube is made up entirely of flat sides. Under most normal lighting conditions this results in all of its sides appearing as one Even Value. 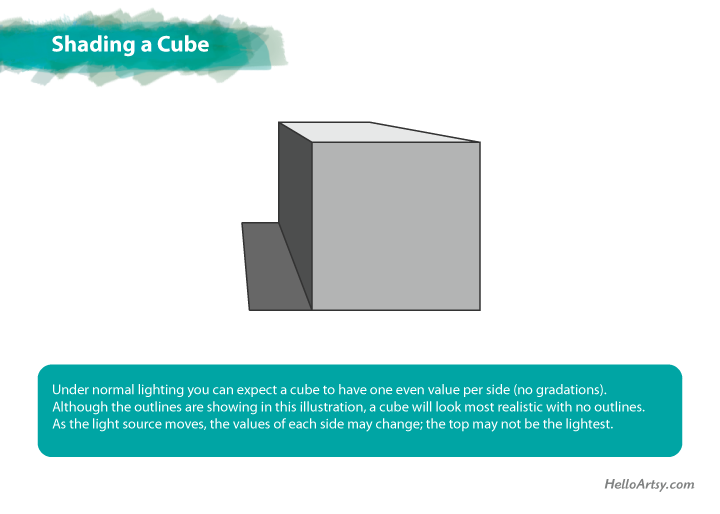 When shading the cube please assign an even value to each side; do not use any value gradations.

I’m not sure why, but as soon as young artists get the hang of shading many of these young artists become gradient happy and they want to shade everything with value gradations. This is just wrong from a realistic sense of drawing. When it comes time to look at a real cube-like object you can study it’s values more closely, but for now let’s make up a simple rule:

When an object has a flat side, that side should be shaded in with one even value.

You’ll notice that the drawing of the cube has different values assigned to each side. That should come as no surprise to you because at this point you are well aware that light reflects differently off different parts of objects with varying intensity rendering them a multitude of different values.

This has been a very simple explanation of the cube and its parts but honestly, that’s all you need to get started drawing realistic cubes. You just need a basic understanding of the form and then your eyes will help you fill in all the nuances when you get around to looking at a real cube under a real light source.

What About the Components of the Cube?

Even the cast shadow poses some difficulty if trying to draw it from imagination. Don’t worry too much about the cast shadow when you are practicing. When it comes time to draw a real cube-like form, the cast shadow will be easy to see and you’ll have no problem determining its shape!

All You Need To Know About The Cube

Putting some mental logic behind your drawing education is highly advisable. It allows you to make predictions about your subject matter and gives you clues as far as what to look for when learning to draw. This logic is merely the beginning though. Sooner than later you will want to study some real objects under real lighting and do your best to draw them realistically.

Hopefully you have found some new insights while learning to draw, I would love for you to leave me a comment below!